If you read the headline, you already know that we have got something good on our hands today. The budget smart TV market in India beyond certified Android TVs is full of half-baked operating systems that either lack support for certain key apps or do not provide a proper high-quality viewing experience.

Tizen and WebOS are limited to Samsung and LG respectively, and we barely get anything worthwhile from them in this budget. I have often suggested plugging in an Amazon Fire TV Stick in a TV for much better user experience in such cases. 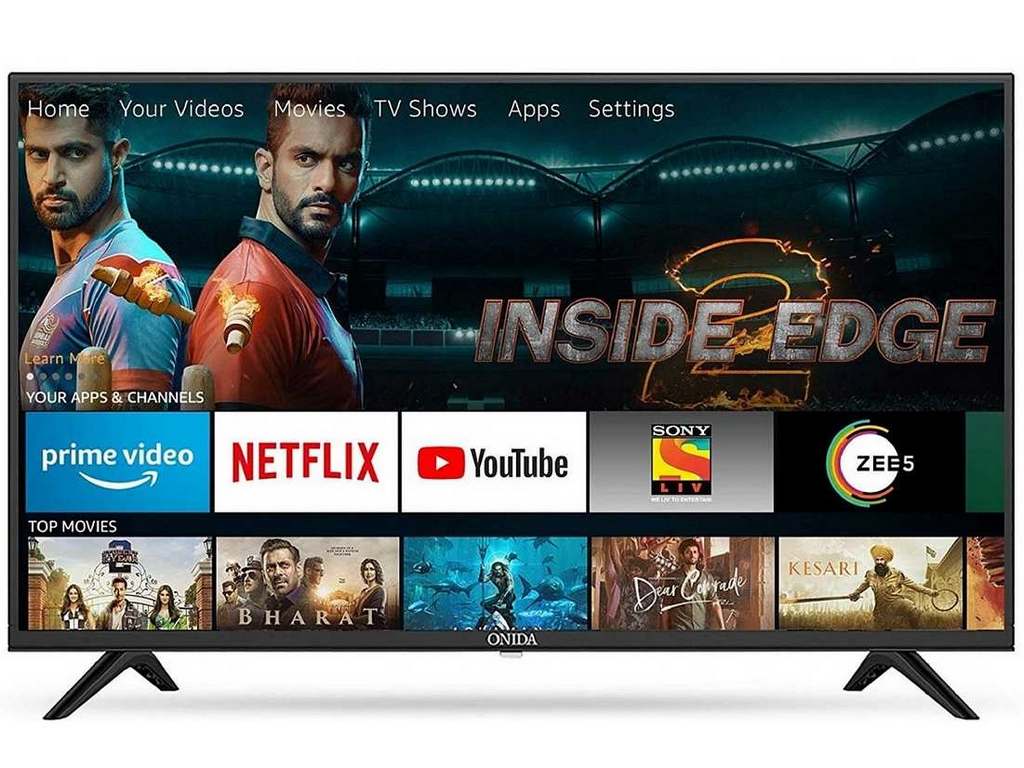 The Onida 43FIF has a fairly standard design with narrow bezels around the 43-inch screen on three sides and a thicker bottom bezel.

I have wondered over the past few years why none of the manufacturers here bothered releasing a TV based on Fire TV OS. I can stop wondering now, thanks to Onida’s new lineup of Fire TV Edition Smart TVs. We have a 43-inch variant from the series for review.

Let’s see what it manages to get right and if certified Android TVs truly have some competition.

The Onida 43FIF has a fairly standard design with narrow bezels around the 43-inch screen on three sides and a thicker bottom bezel with a tiny chin under the company logo that hosts a power LED and IR receiver. Nothing remarkable nor bad. The TV isn’t too bulky and can be wall-mounted or placed on a desk using the bundled stands. The necessary screws and mounts are provided in the package. The side ports are easy to reach if you place the TV on the stands as they are closer to the edge and not near the centre.

One USB port, three HDMI ports — one of which supports ARC, optical audio and headphone out are placed on the left side of the TV, while composite A/V inputs and a LAN port are placed along the lower edge of the rear module. The smart TV has one USB port, three HDMI ports.

The side ports are easy to reach if you place the TV on the stands as they are closer to the edge and not near the centre. But they may be a tad hard to reach if you wall mount the TV as the ports are blocked by a plastic frame and one has to go over or around it to reach them.

This Onida Fire TV Edition smart TV has an 8-bit Full HD IPS panel with a resolution of 1,920 x 1,080 pixels. While a bunch of 43-inch TVs these days flaunt a 4K panel, Ultra HD resolution on a screen this size doesn’t make a world of difference. The difference in quality is barely noticeable, and contrary to popular belief, lower resolution videos often look worse on a 4K panel as compared to a similar-sized Full HD panel.

On the specifications front, this TV is powered by an Amlogic quad-core processor with 1 GB RAM and 8 GB of internal storage, a chunk of which is taken up by the Fire TV OS. The IPS panel has a 60 Hz refresh rate and can get up to 300 nits bright courtesy of the LED backlighting. The TV supports Bluetooth 5.0 and Wi-Fi standards all the way up to AC. Audio output is rated at 16 Watts RMS.

You get a key to select the video source, along with hotkeys for Netflix, Prime Video, Zee5 and Sony LIV.

Since this isn’t an official Android TV, it does not have Chromecast. But it lets you mirror content from your phone or tablet using Miracast. You get an Alexa-enabled voice remote that somewhat resembles the one that you get with a Fire TV Stick but with a few extra buttons. You get a key to select the video source, along with hotkeys for Netflix, Prime Video, Zee5 and Sony LIV. Yes, there’s a mute button too. The button layout is slightly different to that on the Fire TV remote, and if you are used to the latter, you may end up pressing the wrong keys out of habit initially.

The build quality is decent but not in the same league as Amazon’s. A pair of AAA batteries are bundled in the package. The remote came pre-paired with the TV and you don’t have to bother setting it up. The power button on the remote communicates with the TV using IR, while the rest of the functions operate over Bluetooth. You need to point it towards the TV only to switch it on or off; for the rest of the functions, you can point it anywhere. As I touched upon earlier, this remote is voice-enabled. So you can summon Alexa by keeping the microphone button pressed and issue voice commands.

The user interface here is very similar to the one you get on a Fire TV Stick with a few additions like input sources, media player and some extra settings. You need to log in with your Amazon ID to access all the features. If you don’t have one, you can always register and create one. You get apps for all major streaming services like Netflix, Prime Video, Hotstar, Zee5, Sony LIV, etc. All the apps and content are neatly organised and you have settings for sound and picture adjustments among others.

The user interface here is very similar to the one you get on a Fire TV Stick with a few additions like input sources, media player and some extra settings.

The best part here is, unlike most Android TVs, this Onida TV based on Fire TV OS allows you to change the sound and picture settings on the fly while viewing any content, be it through an app or an HDMI source like DTH, or simply via USB. All you need to do is keep the Home button on the remote pressed for a couple of seconds to bring up the menu and make the necessary adjustments. Official Android TVs can take a cue from this.

The picture quality of this TV is quite impressive for its price tag of Rs 21,999. The IPS panel is pretty bright and has good contrast; in fact better than most TVs priced around 20K. Details in the dark areas in high contrast scenes in our test videos were visible on this Onida Fire TV Edition Smart TV. Only the VU 43GA UltraAndroid TV that we reviewed recently comes close in that department. The colour reproduction is impressive too and colours feel vibrant yet natural in most cases.

The 1080p Full HD videos look excellent on this TV and 720p videos look pretty good too. The upscaling engine on this TV does a decent job of making lower resolution videos watchable. You also have tons of picture adjustment options like brightness, colour, contrast, sharpness etc. If that wasn’t enough, you also get advanced options for adjusting white balance, colour temperature, noise reduction and more.

What’s even better is that, unlike Android TVs, these options aren’t buried too deep either. You can access them by simply pressing the Home button for a couple of seconds. And as I had mentioned earlier, they are accessible irrespective of the video source, which is another big plus. Unfortunately, Alexa isn’t smart enough yet to take you to the audio or video settings using a voice command. She can only take you as far as the main settings menu.

The one major drawback of this TV is its audio quality. It has a pair of stereo speakers that deliver a total output of 16 Watts RMS. Though it's sufficiently loud even around the 25 percent mark, and I never had to raise it beyond 50 percent, it sounds too flat. There’s hardly any bass. Thankfully, there are bass and treble adjustments in sound settings. Taking the bass to the maximum and dropping the Dialogue Clarity to low (low is better than off) adds a touch of warmth to the sound, but it is still far from optimal.

All you need to do is keep the Home button on the remote pressed for a couple of seconds to bring up the menu and make the necessary adjustments.

It is manageable for general TV viewing like news, sports or soaps, but not movies or music. It would be better to connect a soundbar or 2.1 channel speakers if you are looking for a much better audio experience. You do get HDMI ARC, optical and headphone out options here.

The TV takes about 45 seconds to boot up and get to the home screen when you switch the power on from the mains, which is a bit on the slower side for smart TVs these days. But post that, if you switch it off and on from the remote control, the TV comes back on in literally a second from standby mode. That is awesome. If you switch if off from the remote and leave it like that for an hour or so and then switch it back on, it takes a little longer but is still ready in under 5 seconds. No complaints there either.

Video file format support through USB is a bit of an issue. Actually, the default media player is erratic. If it cannot play a particular file, it just freezes the TV. You are left with no other option but to switch it off and on from the mains. Thankfully, you do get VLC Player for Fire TV OS in the app store. It managed to play almost every file with various codecs I threw at it smoothly, except 4K videos. They lag big time and are unplayable. Probably the processing hardware and 1 GB of RAM isn’t sufficient to process the 4K video on this OS. It is not a deal-breaker given that this is a 1080p TV but it would have been nice to have that option. Maybe a software update can fix it in the future. The default player certainly needs an update.

Other than that, there was nothing glaringly wrong with this TV. Even the TV viewing experience via DTH was good, especially HD channels. Non-HD channels are just about watchable, but that’s the case with every TV these days. Can’t blame any TV brand for poor broadcast quality. This Onida TV can also be set to remember the last input source and start in that mode next time.

The Onida 43FIF Fire TV Edition Smart TV can be purchased on Amazon India for Rs 21,999 with a one year warranty. You often get Rs 2,000 cashback in your Amazon Pay wallet with this TV, but do verify if the offer is still available at the time of purchase. Even without the offer, it’s a very good deal. You get a 43-inch Full HD smart TV with very good picture and lots of picture adjustments, a neat UI and an integrated Amazon Fire TV stick that remains one of the best platforms for media consumption.

Audio quality is not great here and you may need to spend extra for better sound. But everything else is pretty much sorted in this TV. Fire TV OS is a great alternative to certified Android TVs and is miles ahead of AOSP and Linux based smart TV OSes. It’s ironic that no other manufacturer in India till date released a TV based on Fire TV OS. But now that we have one, and the fact that it’s picture quality is impressive too for the segment, we have no reason to not recommend it. Go, fire it up.

Realme Smart TV 43 Review: A good budget TV that gets several things right, if not all