OnePlus 5T image renders show up on Weibo; expected to launch on 16 November

While most rumours so far have been revolving on what new the OnePlus 5T will have to offer, a new report reveals that the phone could launch on 16 Nov.

A day after notable tipster Evan Blass confirmed the much-rumoured OnePlus 5T, more news has emerged on the internet suggesting that OnePlus could launch the smartphone soon. 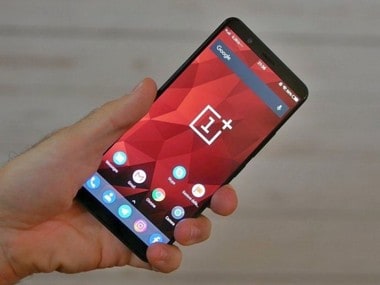 Most of the rumours in last few weeks have been focused on what new features have been added to the upcoming OnePlus 5T. However, a new report by GizChina reveals what seems to be the official launch date of the upcoming flagship by OnePlus. The image shows us an alleged Amazon promotional slide for the OnePlus 3T stating the launch to be on 16 November. The date of sale is however deliberately marked out. The image also reveals the likely catchphrase for the upcoming smartphone. As reported previously, the catchphrase reads, "Larger display. Same footprint," suggesting the inclusion of an 18:9 display.

Another report by GSMArena surfaced on the internet that goes on find alleged renders of the upcoming smartphone. The renders were spotted on Chinese social media website Weido and they give us a clearer look at the slim bezels and the wider display. One thing to note here is that OnePlus has not announced the device at the time of writing, but CEO Carl Pei could have dropped us an obvious hint. Carl Pei took to his Twitter account to post a teaser photograph hinting at what the CEO captions as being taken using "a great camera". Though he does not go on to explicitly mention the OnePlus 5T, it is likely that the sample is from the smartphone.

Cool photo, must have come from a great camera 😉 pic.twitter.com/DyiULnyTYN

As per the specifications leaked on benchmarking site AnTuTu earlier, the phone is likely to pack a 6-inch display with a 2160 x 1080p resolution pointing towards a display with 18:9 aspect ratio. The fingerprint scanner is expected to be shifted to the back of the device which is a first for the company.

OnePlus 5T is expected to be powered by Qualcomm Snapdragon 835 chipset along with the Adreno 540 GPU. It is also likely to pack a massive 8 GB RAM and 128 GB of onboard storage, though a 6 GB variant with 64 GB of storage will also be available. As far as cameras are concerned, the OnePlus 5T is expected to get two 20 MP lens on the back as a dual-camera setup. The phone is also expected to run Android Oreo 8.0 out of the box. The AnTuTu scores should, therefore, be taken with a pinch of salt as final specifications of the device may vary.