Struggling Nokia Corp. turned a fourth-quarter net profit of 202 million ($270 million) compared with a loss of $1 billion a year earlier, but revenue fell 20 percent as it failed to make gains in the fiercely competitive smartphone market.

Helsinki: Struggling Nokia Corp. turned a fourth-quarter net profit of 202 million ($270 million) compared with a loss of $1 billion a year earlier, but revenue fell 20 percent as it failed to make gains in the fiercely competitive smartphone market.

The Finnish company said Thursday that revenue dropped to 8 billion ($10.6 billion) from 10 billion as smartphone sales plunged 55 percent, and it gave a grim outlook, saying it would not pay a dividend for 2012 to save money.

Although the company swung into profit after a spell of six consecutive quarterly losses, markets were not convinced. Its share price plunged, closing down more than 5 percent at 3.30 on the Helsinki Stock Exchange.

The former No 1 cellphone maker said it expects operating margins in the first quarter to be "approximately negative 2 percent, plus or minus four percentage points," citing increased competition and lower-than-expected demand for its Lumia handsets and cheaper Asha models, which have been popular in emerging markets. 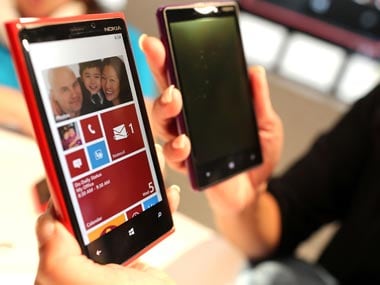 The news of the dividend and sales figures came almost two weeks after Nokia had pre-released some results and announced that its handset business had returned an underlying profit.

Neil Mawston, a technology expert from Strategy Analytics in Boston, said Nokia's global smartphone market share had fallen to a record low of about 3 percent.

"Nokia is on a recovery curve at the moment," Mawston said. "In terms of volumes, they really need to improve. They regained profit, the next step is to regain market share."

The company saw a backslide in the world's largest devices market, China, where it sold only 4.6 million handsets in the quarter - a drop of some 70 percent from a year earlier with sales revenue there plunging almost 80 percent.

Nokia, formerly the world's top cellphone maker, had hoped to stem the decline in smartphones through a partnership with technology giant Microsoft Corp. in 2011 in a major shift of strategy, with Windows Phone software becoming the main platform for its smartphones.

But the firm's performance in North America - the frontline of the smartphone market - continued to be a disappointment. Shipments there grew 40 percent on the year, but to a mere 700,000 devices.

In all, Nokia sold 45 million cellphones in the fourth quarter, 15 percent fewer than in 2011.

CEO Stephen Elop said he was encouraged that the company had reached "underlying profitability" and strengthened its financial position but cautioned that more cutbacks could be expected.

"We remain focused on moving through our transition, which includes continuing to improve our product competitiveness, accelerate the way we operate and manage our costs effectively," Elop said.

Nokia CFO Timo Ihamuotila conceded that the company had not been able to meet demand for its top range Lumia phones at the end of the last year caused by a shortage of components, and it remained unclear if those problems would persist.

A positive note in Nokia's report was the performance of its network operations, Nokia Siemens Networks, a joint-venture with Germany's Siemens AG. It had been lossmaking for years, but now showed signs of improvement, mainly because of restructuring measures including substantial job cuts.

Elop said the division "drove record profitability" during the quarter, with operating profit surging to 251 million from 67 million the previous year as revenue grew 5 percent to 4 billion.

Nokia, which has been struggling to cut costs by 1.6 billion by the end of this year, announced 10,000 job cuts in June and closed down research and development facilities globally as well as its main manufacturing plant in Salo, Finland - the company's last assembly plant in Europe.