Nokia 5310 review: Meant for music-lovers, but it’s got something for budding gamers too

The Nokia 5310, doesn’t look as good as the OG XpressMusic phone, but the new design is compact, lightweight, and fits in pockets of all shapes and sizes.

Nokia has brought back a bunch of classic phones from the late 90s and early 2000s in the last few years and calls this series the ‘Originals’. Joining this segment of phones is the Nokia 5310, which we have known as the ‘XpressMusic’ phone from back in the days.

The entire Originals series’ USP is nostalgia. The renewed Nokia 3310 and the Nokia 8110 were meant to take you back to the golden days. And that they do.

When I received the Nokia 5310 for review, I was super-excited, and the T9 keyboard especially hit me right in the feels. Did you ever make bets with your friends to see who could type a sentence fastest on a T9 keypad? I did. I was really fast. But while reviewing the phone, I realised my thumbs have atrophied somewhat.

I used the phone as my primary device for two days (while also doing some social media detox). After I made a few calls to let my friends know I was calling from the past, typed a few texts in T9 (which went unanswered, because who uses SMS anymore?), I very quickly realised that I didn’t know what else to do with the phone.

The thing is, you and I remember the XpressMusic phone from when it was one of the coolest phones in the market, and it was the premium device of the time. Now, however, the Nokia 5310 has been renewed to capture the lowest budget segment in the market, and specifically caters to people who don’t want a very complex phone, have a low budget, or for those who want a secondary device for calling that has a long-lasting battery. There’s one more thing that the Nokia 5310 focuses on though – music.

A battery that lasts

The Nokia 5310 has a 1,200 mAh battery, which may not seem like much in comparison to smartphones with 5,000 mAh batteries right now, but this phone powers a 2.4-inch QVGA display, a VGA rear camera, and runs the very basic Nokia Series 30+ operating system. With that set of features, the phone easily lasts up to two days on a single charge. On standby, it lasts over a week, easily. Nokia 5310 has a removable battery and comes with dual-SIM support.

The Nokia 5310 supports dual-SIM (micro + micro). The option to use two SIMs is always good to have, especially when you have a different work and personal number. However, if like the vast majority of the populace, you’ve been using a smartphone, switching to the Nokia 5310 will pose a speed bump: most phones these days use nano-SIMs, not micro-SIMs. You’ll need the little plastic bit that came with your SIM card when you first bought it, or procure a nano-to-micro adapter from somewhere. This is a bit inconvenient, and straight-up nano-SIM slots would have been preferable.

The highlight of the Nokia 5310 is definitely music. It has dedicated buttons on the top half of the phone, on either side. From the left, you can adjust the volume up and down, and on the right, there are buttons to play/pause, skip or go back to the previous track. The track skip buttons can also be used to change channels in radio mode. Nokia 5310 has a volume rocker on the left. Image: tech2/Nandini Yadav

The phone also comes with wireless FM radio. Most feature phones need you to plug in the earphones to use FM, but the 5310 works with or without. A pair of earphones also come bundled in the box. It features more controls for music on the right. Image: tech2/Nandini Yadav

The audio output of the phone isn’t high quality; it’s focused on being loud, which it is. The earphones that come bundled are quite plastic-y and are just sufficient to listen to music privately.

The device does offer you an option to expand upon the internal storage on the device – up to 32 GB using a MicroSD card – to create more space for music.

According to Nokia, music is central to this phone, but the highlight (and surprise element) for me on this device, was the pre-loaded apps: Assassin’s Creed Unity and Asphalt 6, in addition to classic games such as Snake, and Doodle Jump. Asphalt 6 on the Nokia 5310 is a straight-up reminder of Road Rash. You just drive through a road keeping your car from bumping into other vehicles on the road. And despite being basic, I got hooked on to the game. 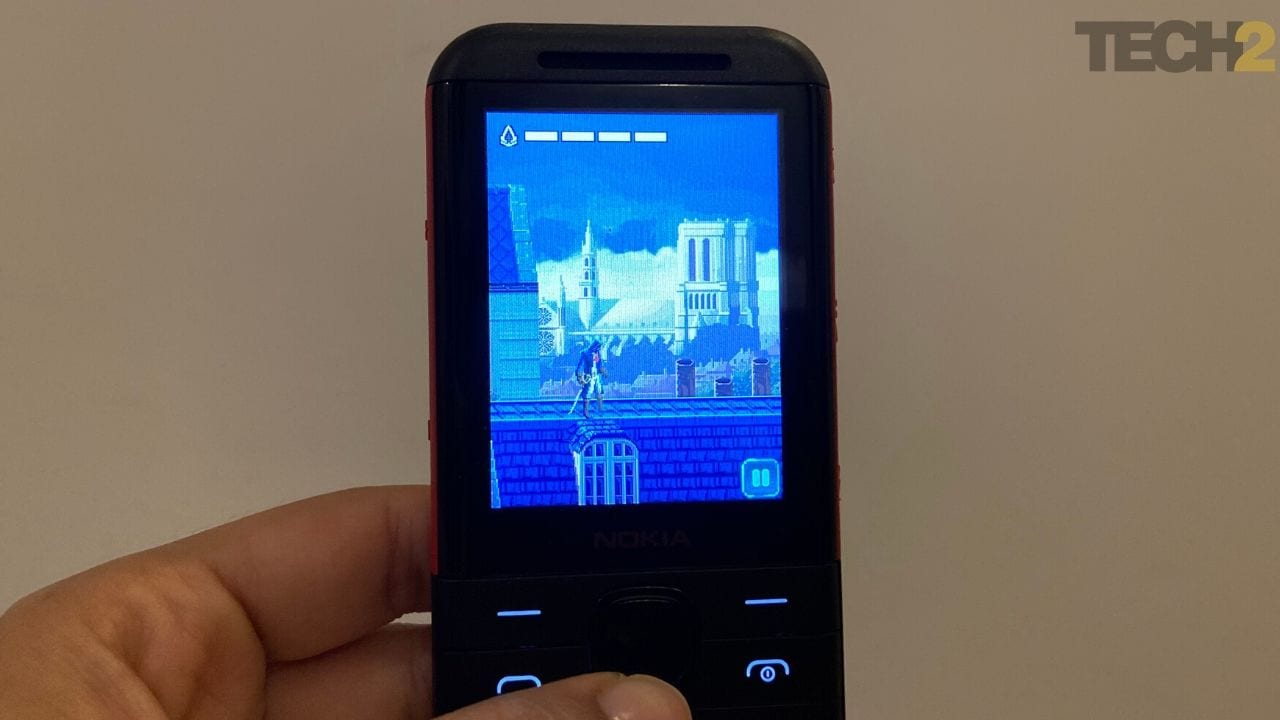 Assassin’s Creed Unity on the Nokia 5310 is also super-interesting. Of course, it’s nowhere near the experience of gaming on a smartphone, PC, or console, but I would definitely not dismiss the game just because you play it on a simple keypad with three buttons. The game is quite engaging.

With either of the games, I had absolutely no trouble with the app crashing, device heating up or screen stuttering.

Notably, the Asphalt 6 has a free mode and an option to upgrade level by paying through your network bill. The Assassin's Creed, on the other hand, only comes with a handful of free trials.

The Nokia 5310, doesn’t look as good as the OG XpressMusic phone, but the new design is compact, lightweight, and fits in pockets of all shapes and sizes. It has good battery life and supports dual-SIMs.

Additionally, the Nokia 5310 makes sense for you if music is central to your day-to-day life – not because the device offers exceptional performance in terms of audio quality, but for music being central to its design and UI. Music-lovers were kept in mind while designing the phone.

If you are someone on a budget and looking for a phone under 5k, and that’s how you’ve landed on this review, then I’d rather you spend a little more and put your money on a Redmi 4A.

However, if you are specifically looking for a feature phone, then besides the Nokia 5310, you should also look at the JioPhone 2 or Nokia 8110, both of which run on KaiOS, which means, they support WhatsApp. The Nokia 5310 doesn’t support WhatsApp, but does have a Facebook app, so there’s that.

Nokia 5310 feature phone to launch today in India: Here is all we know so far

Itel it5311 launched as first feature phone with fast charging