The report also mentions that the Nokia 10 will come with similar design as the Nokia 9, will feature double-glass (front and back) on the smartphone.

The sketch of Nokia's penta-lens camera smartphone has leaked online. The leaked images show that the company is expected to bring out a uniquely designed camera on its upcoming flagship. 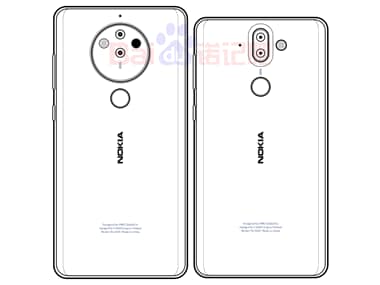 The sketch of the camera, reported by Nokia Power User, depicts a dual-lens camera placed inside a circular frame on the rear side of the smartphone (expected to be Nokia 10). The other lenses are expected to be hidden inside the module. According to the image, a microphone and a flash sit on each side of the vertically aligned camera module. The fingerprint scanner is placed below the camera on the rear side of the smartphone.

Zeiss, the company making the lenses, recently patented a "Miniature zoom camera". The camera patented by the company has multiple lenses arranged in a circular manner that rotates to become the main lens. The camera shown in the image doesn't show other lenses placed on the device but the report suggests that the lenses might be hidden inside the camera module. The user can change the focal length of the camera by rotating and aligning the multiple sensors with the main camera.

The report also mentions that the Nokia 10 will come with a similar design as the Nokia 9. It will feature double-glass (front and back) on the smartphone and will be powered by Snapdragon 845.

New penta-lens case for upcoming Nokia 9 Pureview leaked, but no news about the phone

The rumoured Nokia 10 is actually the Nokia 8 Pro and it will arrive with a penta-lens camera and Snapdragon 845: Report