Nissan Magnite sub-four-metre SUV unveiled in India: Here is what it looks like

The Nissan Magnite has an unladen ground clearance of 205 mm and a 5.0 m turning radius, which Nissan claims is segment best.

Nissan India has unveiled the Nissan Magnite today. This sub-four-metre SUV is the Japanese brand's first new launch in the Indian market since the Nissan Kicks and is expected to set the stage for its revival in the country. In the larger scheme of things, the Nissan Magnite is one of eight models that Nissan has in store for the Indian, Middle-Eastern and African markets as part of its global mission of streamlining operations and improving profitability. Underscoring the new beginning that this model simplifies, the Magnite is the first car to feature the new 2D Nissan logo. This aside, the Magnite is also unique in the way it is being positioned in the bustling sub-four-metre SUV space. Although dimensions have not been revealed, the Magnite looks significantly larger than small crossovers like the Mahindra KUV100 and the upcoming Tata HBX, but marginally smaller than the usual sub-four-metre crowd of the Tata Nexon, Hyundai Venue and Maruti Suzuki Vitara Brezza.

There's no hiding the fact that the Magnite was originally supposed to come to life as a Datsun, before Nissan's new strategy called for a greater focus on the core brand. This is evident from the face of the Magnite which carries the full-face hexagonal mesh grille, the L-shaped DRLs and the very sharply cut full LED headlamps.

Moving on from here, the rest of the Magnite follows Nissan's newest design philosophy with its focus on some very prominent sculpting as seen with the heavy bulges to the sides of the bonnet which flow into the flat nose. Some similarly prominent haunches over the wheel arches combine with other body panels to create a greater sense of mass around the car. This is especially true around the heavily bulged rear three-quarter section which meld into the taillamps. The roofline drops slightly, much like in the Kicks, but there is a unique funnel roof design which is an element that Nissan says will make the Maginite one of the most aerodynamically efficient SUVs in its space.

The firm says that improved perceived quality was a big focus with the Magnite. So while LED tail lamps were forgone, the crisply styled rear section uses a top plastic panel in conjunction with the metal bootlid to create some very sharp edged lamps. Similarly, the silver-highlighted cladding all-around has been crimped into the bodywork with more rubberised cladding added to the inner door sills. A set of 16-inch wheels(on top trims) and a functional roof rack are other notable touches. In fact, Nissan has also worked on making sure the doors feel substantial to use, and close with a reassuring thud.

The Nissan Magnite has an unladen ground clearance of 205 mm and a 5.0 m turning radius, which Nissan claims is segment best.

The Magnite is based on the Renault-Nissan alliance's CMF-A platform. We already know this architecture to be very space-efficient from the Triber, and Nissan seems to have put that trait to good use in the Magnite as well. Head, shoulder and knee room in the front seems reasonably close to some sub-four-metre SUVs while at the rear there is enough knee and headroom for two to sit comfortably or for three in a pinch. The fabric-upholstered seats themselves felt well supported too with good back and under-thigh support. Visibility outward should also be quite good, with the edges of the bonnet remaining visible despite the crests. Seat height adjustment and steering reach adjustment is also available and there was special focus on ensuring ingress/egress is not compromised. 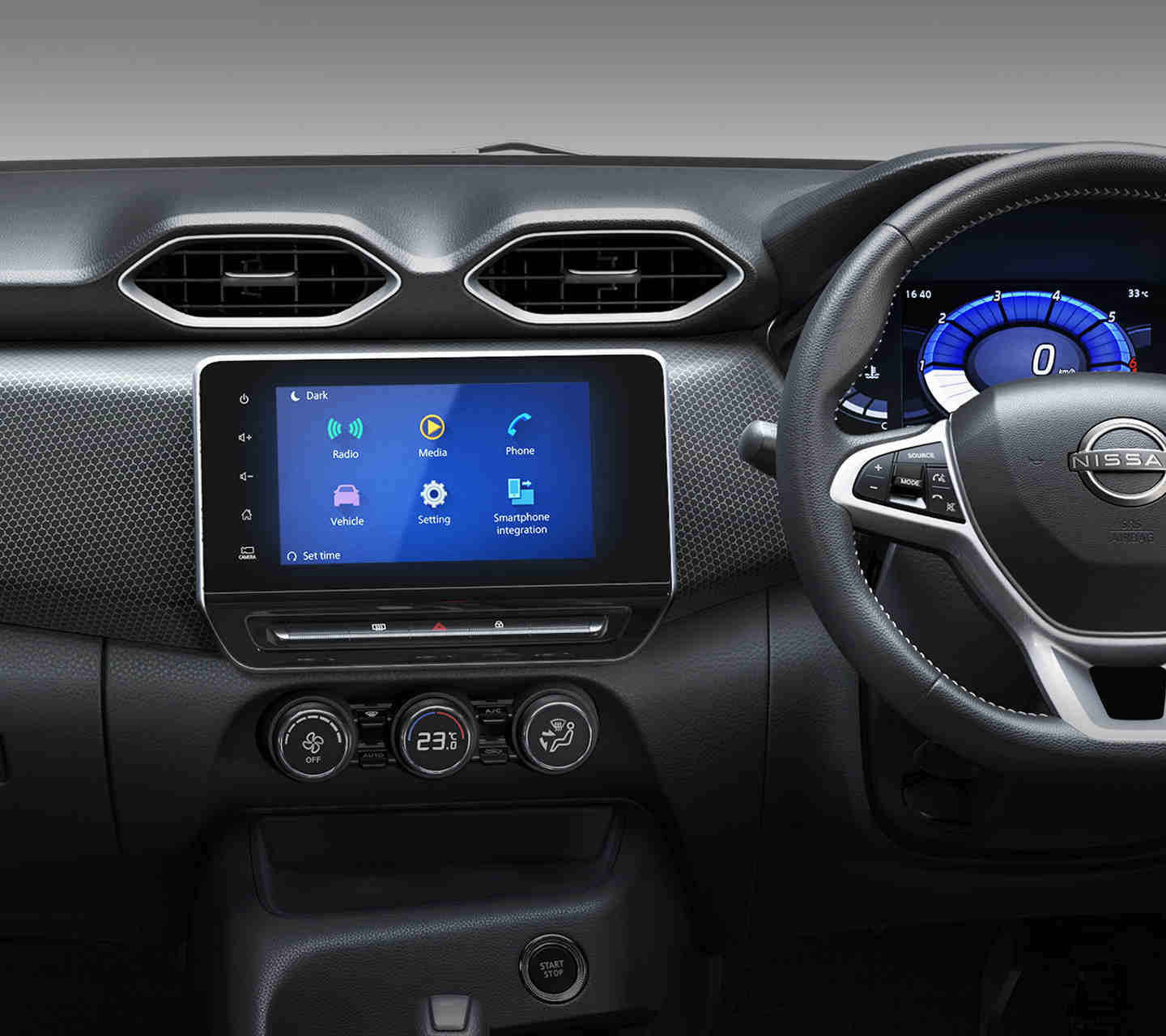 The fabric-upholstered seats themselves felt well supported too with good back and under-thigh support.

The cabin is done up in an all-black colour scheme. As is expected in the Magnite's expected price bracket, there aren't too many soft-touch panels here. But Nissan has made up for that with a very contemporary looking dash, starting with the top pane and it hexagonal air vents. Below this is a rich looking textured dash face which also houses the newly-developed 8-inch infotainment system and a bank of buttons in the centre console , canted 5 degrees towards the driver. This section will look familiar if you've spent any amount of time in the newer lot of Renault-Nissan cars. The Magnite takes things up a notch with integrated displays for the climate control within the rotary knobs.

The most striking feature in this space is the 7-inch digital display for the driver, that sits between a pair of digital dials. This unit is bright, well resolved and with smooth transitions between menus elevates the cabin experience substantially. The steering is again standard Renault-Nissan fare, but now finally adds all controls on the steering wheel, doing away with the stalk-placed switchgear on the column.

The Magnite's cabin is also quite practical with the tiered centre tunnel that houses the wireless charger at one level, cubbyholes and an armrest at another. There is also a large 10-litre glove box, and deep door pockets. There are 12V outlets for both rows and USB charger at the front. The boot is also a reasonable 336 litres, expandable via a 60:40 split rear seat.

As is quickly becoming imperative towards success in this very competitive sub-four-metre SUV space, the Magnite comes with a vast list of features. The headlining offerings are a 360-degree camera with changeable views, a possibly industry-first wireless Android Auto/ Apple Carplay compatibility, TPMS, cruise control. An optional Tech pack will add an air purifier, puddle lamps, ambient lighting, premium audio and wireless charging. There is no word yet on whether a sunroof will be available as an option.

Nissan India hasn't revealed power outputs just yet but stated that the Nissan Magnite will be powered by the HRA0 powerplant. This is a 1.0-litre three-cylinder turbo-petrol motor that powers many Nissan and Renault cars globally like the Nissan Almera and new-gen Micra and the Renault Clio and Euro-spec Captur.

We expect to see this motor in the Magnite in its most common 100PS and 152 Nm guise. From the same family of engines as the larger 1.3-litre turbo that recently debuted in the Duster, this motor too features an electronically-controlled wastegate and mirror bore coating for the cylinders. This engine will pair with Nissan's latest generation of the Xtronic CVT. We also expect to see a six-speed manual gearbox option.

Although Nissan hasn't specified this, we wouldn't be surprised if the lower trims of the Magnite are offered with the 1.0-litre Energy petrol motor form the Triber with its 72PS and 96 Nm.

In terms of safety, Nissan has said that the Magnite will come with two airbags, ABS, hill-start assist and traction control. Nissan's unique Vehicle Dynamics Control system will also be made available.