News18 concludes its 2017 edition of the Tech & Auto Awards; Samsung Galaxy S8, Paytm, Audi A5 among the winners

The awards function saw a total of 15 awards being handed out to respective winners with seven for tech and the remaining eight for the automotive industry.

News18.com held its 'Tech and Auto Awards' in New Delhi on 29 November. The event was held amidst the presence of industry veterans, celebrating technology and automotive products that have excelled in the respective sectors. 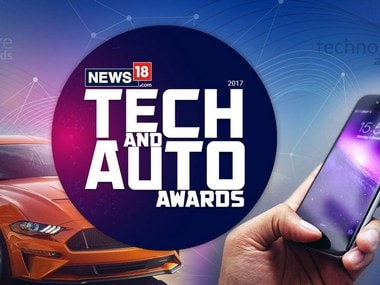 The event saw a total of 15 awards being handed out to respective winners with seven for tech and the remaining eight for the automotive industry. The Chief Guest for the event was Ravi Shankar Prasad, Cabinet Minister, Law and Justice and Ministry of Information Technology.

Selected by a jury that included veterans from auto and tech industry, the awards night saw brands such as Maruti, Toyota, Volkswagen, Volvo, Audi, Mercedes and others go head-to-head for coveted awards like Car of the Year, Sedan of the Year and Hatchback of the Year and more. While Tech brands like Samsung, Apple, Nokia, Xiaomi, LG and others were seen fighting it out for awards in the Smartphone of the Year, Design of the Year and other categories.

Here is the detailed list of the award winners across categories.

Personalities like Vijay Shekhar Sharma of Paytm, Amitabh Kant of Niti Aayog and others were vying for the Tech Personality of the Year award.

Apart from the award distribution itself, the evening included a keynote speech by Larry Paulson, vice president of Qualcomm and President of Qualcomm India and a special video address by Nitin Gadkari, Union Minister of Road Transport & Highways and Shipping.

Commenting on the occasion, Manish Maheshwari, the CEO of Network18 Digital said, “At News18.com, it is our constant endeavour to connect with our consumers through different channels and make a difference to their lives by offering content that is most relevant to them. Tech and Auto Awards is one such platform to bring together the two most important sectors where today's consumer spends the most time on."

Disclaimer: News18.com is part of the Network18 group which also publishes Firstpost.com and tech2