New Xiaomi device with budget-friendly specs spotted, could be the Redmi 5A

A Xiaomi phone with budget-friendly specifications has surfaced online with the codename MCT3B. The device was first spotted by TENAA and suggested that the phone could be the Redmi 5A. 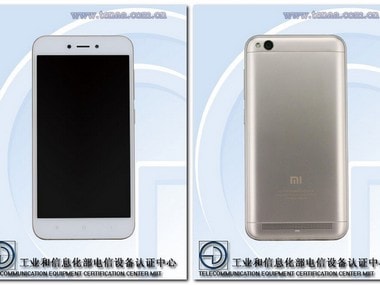 The dimensions of the phone measure 140.44 x 70.14 x 8.35 mm and the device weighs 137 grams. It has a 5-inch TFT-HD display while the Redmi 4A, on the other hand, had a IPS LCD display. Both the 4A and  MCT3B lack the fingerprint sensor which further bolsters the credibility of MCT3B being the successor to 4A.

In terms of specifications the MCT3B, running on Android 7.1.2, will have a 1.4 GHz processor and 32 GB of internal storage which is expandable via a microSD card. The MCT3B has a 13 MP rear-sensor and a front-facing 5 MP camera.

The device has a 3,000mAh battery and supports 4G connectivity, dual-SIM support and Wi-Fi among others. If the phone is really the Redmi 5A then Xiaomi can peg it for a November release like the Redmi 4A previous year.

Recently Xiaomi unveiled the Mi A1 smartphone in India making it the first dual-camera phone from Xiaomi to hit the Indian markets. The Mi A1 is a lot like the Mi 5X in terms of design, specifications and the camera.

However, the thing that sets Mi A1 apart is the fact that it is the first Android One phone made by Xiaomi which means that it will run on stock Android rather than Xiaomi's conventional MIUI skin.