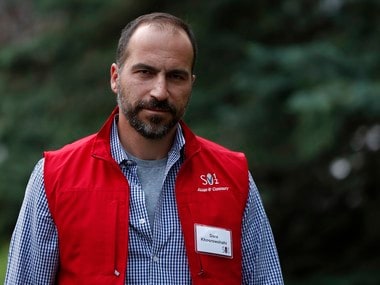 Expedia’s stock dropped as much as 5.4 percent to $141.21, recording its biggest intraday percentage loss in more than one year.

According to an internal memo sent to Expedia staff, Khosrowshahi has been asked to lead Uber.

“Nothing has been yet finalised, but having extensively discussed this with Dara, I believe it is his intention to accept,” Expedia Chairman Barry Diller wrote in the memo seen by Reuters.

In Khosrowshahi, Uber’s board has picked an executive with a track record of driving growth while also delivering profits - precisely what the unprofitable Uber needs to satisfy investors.

“Khosrowshahi leaving is a major loss for Expedia, which will likely sell off as a result,” Cowen & Co analyst Kevin Kopelman wrote in a note.

“We view Expedia’s operations in 2017 as back to basics with the company re-focused on improving search, increasing conversion rates, and building out supply — all core tenets of the OTA (online travel agency) ecosystem,” Anmuth said.

“While execution under Khosrowshahi hasn’t been flawless, it has been exceptionally good. He has been a major factor behind the success of the company over the past dozen years,” Mahaney said.

In the race for the Uber top post, Khosrowshahi beat out General Electric Co Chairman Jeff Immelt, who said earlier on Sunday he was no longer in the running.

Meg Whitman, CEO of Hewlett Packard Enterprise, had also been a leading candidate, but she last month denied having any interest in the job.

Cowen's Kopelman, however, believes that Expedia has a strong management bench, with largely independent teams of seasoned executives in place running the company's major divisions.

Up to Friday's close of $149.26, Expedia's stock had risen about 32 percent this year, compared with a 29.4 percent increase in the Dow Jones Internet Commerce index.