The first example of the new Skoda Octavia built in India is an L&K variant finished in Lava Blue.

Skoda Auto has announced the beginning of production of one of four models it will launch this year – the new Octavia. The first unit of the 2021 Skoda Octavia has rolled out of the company’s facility in Shendra, Aurangabad, ahead of the Octavia’s return to the market later this month. Interestingly, the first example to roll out was the fully-loaded, top-spec Octavia Laurin & Klement version finished in Lava Blue, but additional images supplied by the company show the new Octavia will also be available in black.

The new Skoda Octavia will be launched towards the end of April, and will be available only with a petrol engine option at the time of launch. However, Skoda has previously said it would evaluate demand for diesels in the higher segments, and could potentially bring back diesel engine options for its larger offerings including the Octavia. 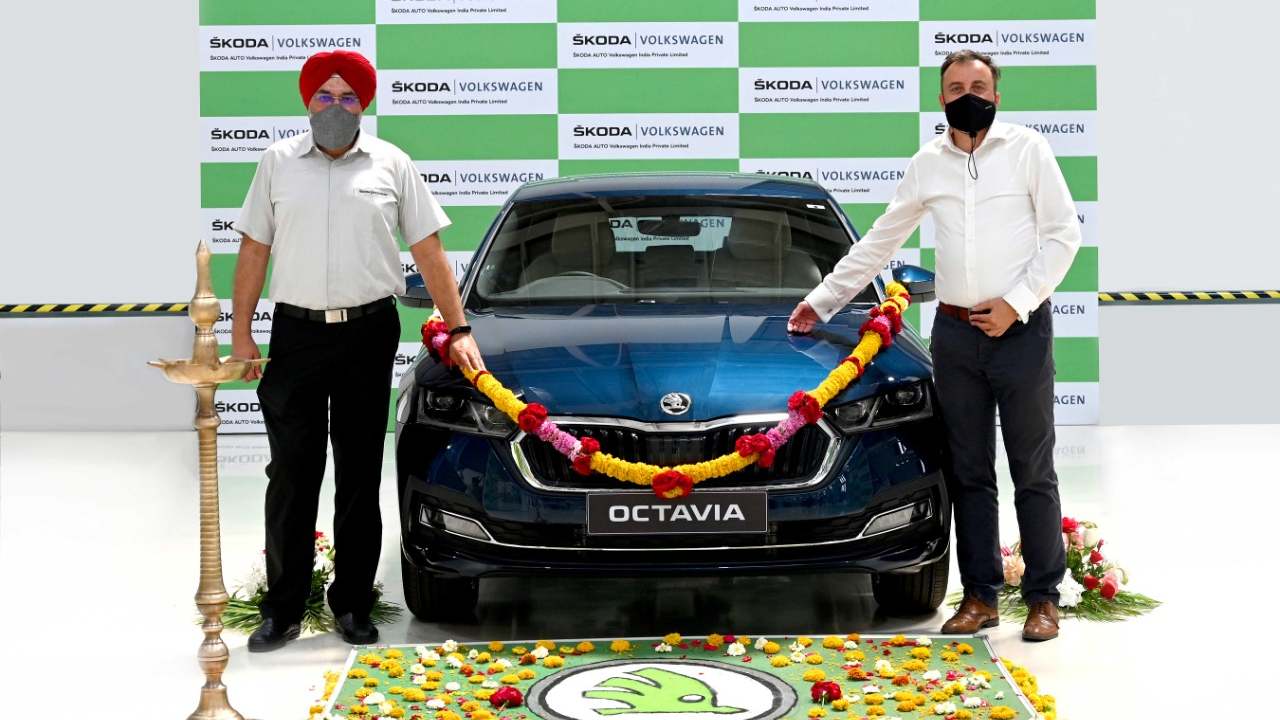 The new Skoda Octavia is one of four launches Skoda has lined up for India in 2021. Image: Skoda

Based on the Volkswagen Group’s modular MQB platform, the new Skoda Octavia is 19mm longer and 15mm wider than the outgoing model. Gone is the last-gen Octavia’s split-headlight setup, replaced by more conventional headlights, and the chiselled appearance brings it in line with newer Skoda models such as the Scala hatchback and the updated Superb.

On the inside, the new Skoda Octavia packs a 10.25-inch Virtual Cockpit digital instrument display, a 10-inch touchscreen infotainment system, three-zone climate control, a head-up display, connected car tech and wireless smartphone charging, to name some of the goodies. However, it remains to be seen if most of these are also carried over to the India-spec model.

While Skoda has confirmed the new Octavia will get the 190hp, 2.0-litre TSI turbo-petrol engine at launch, more engine options are likely to be offered going forward. Just like the previous Octavia – which was also available with a smaller 1.4-litre TSI engine – the new Octavia, too, is likely to receive a 150hp, 1.5-litre TSI (which will power the Skoda Kushaq and Volkswagen Taigun) sometime down the road as a more affordable alternative. As was the case with the outgoing Octavia, the new Skoda Octavia 1.5 TSI is expected to be offered with a six-speed manual gearbox, while the 2.0 TSI is likely to get a seven-speed DSG automatic.

New Skoda Octavia prices are expected to be in the range of Rs 20-25 lakh (ex-showroom).