In its latest generation, the Skoda Fabia has grown longer, wider and more tech-heavy than ever.

At the conclusion of a lengthy teaser campaign, the 2022 Skoda Fabia made its world premiere in Prague last night. The Fabia is Skoda Auto’s premium supermini, one that – in India, particularly – showed how grown-up a hatchback could be. Now in its fourth generation, the Skoda Fabia has grown notably larger, packs more technology than ever before and is being offered with petrol engines only. On the outside, it’s more evolution than revolution, but dig a little deeper and you’ll notice the substantial changes Skoda has made to its small car. 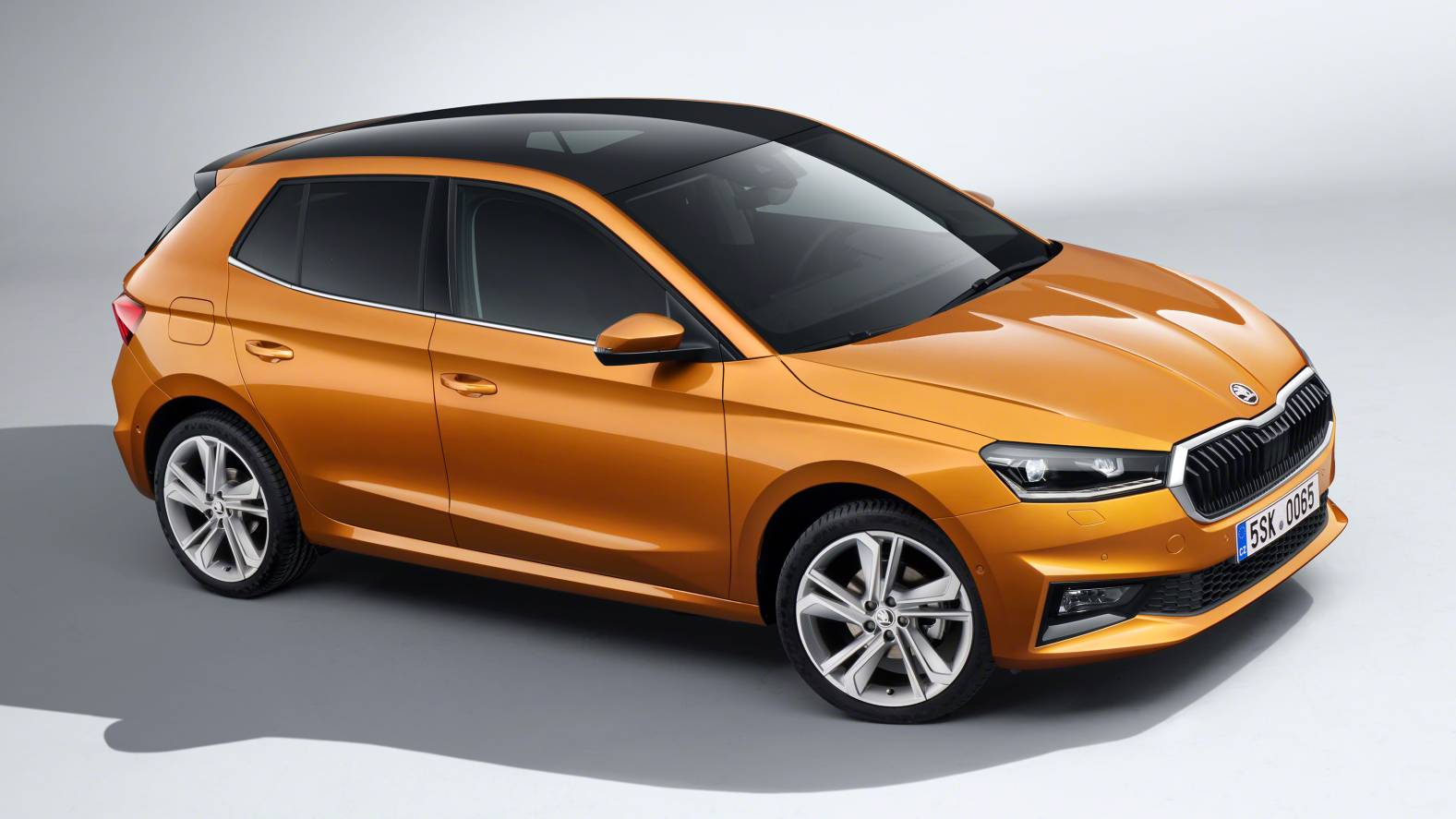 For starters, the new Fabia has shifted from the age-old PQ platform onto the Volkswagen Group’s versatile MQB A0 platform; the same architecture that has been customised for India and will underpin the Skoda Kushaq. In terms of length, the new Fabia is 111 mm longer than its predecessor, with 94 of those millimetres being added to the wheelbase. At 2,564 mm, the new Fabia’s wheelbase is longer than that of even the first-gen Skoda Octavia. It is also 48 mm wider, and features LED headlights as standard (all-LED lights are an option), with wheel sizes ranging from 14- to 18-inches. Overall, the 2022 Skoda Fabia is 111 mm longer than its predecessor. Image: Skoda

As before, the Fabia steers clear of bold design flourishes, and has been brought more in line with some of the brand’s bigger vehicles including the Scala hatchback, Octavia and Enyaq iV. The signature Skoda grille gives it an instantly recognisable face, and along the sides you’ll notice a prominent shoulder line, as well as the triangular shape on the front doors, which is a nod to the wedge segment of the Czech national flag. At the back, the tail-lights quite reminiscent of the Kushaq’s, and there’s now a more prominent, contrast-coloured roof-mounted spoiler. 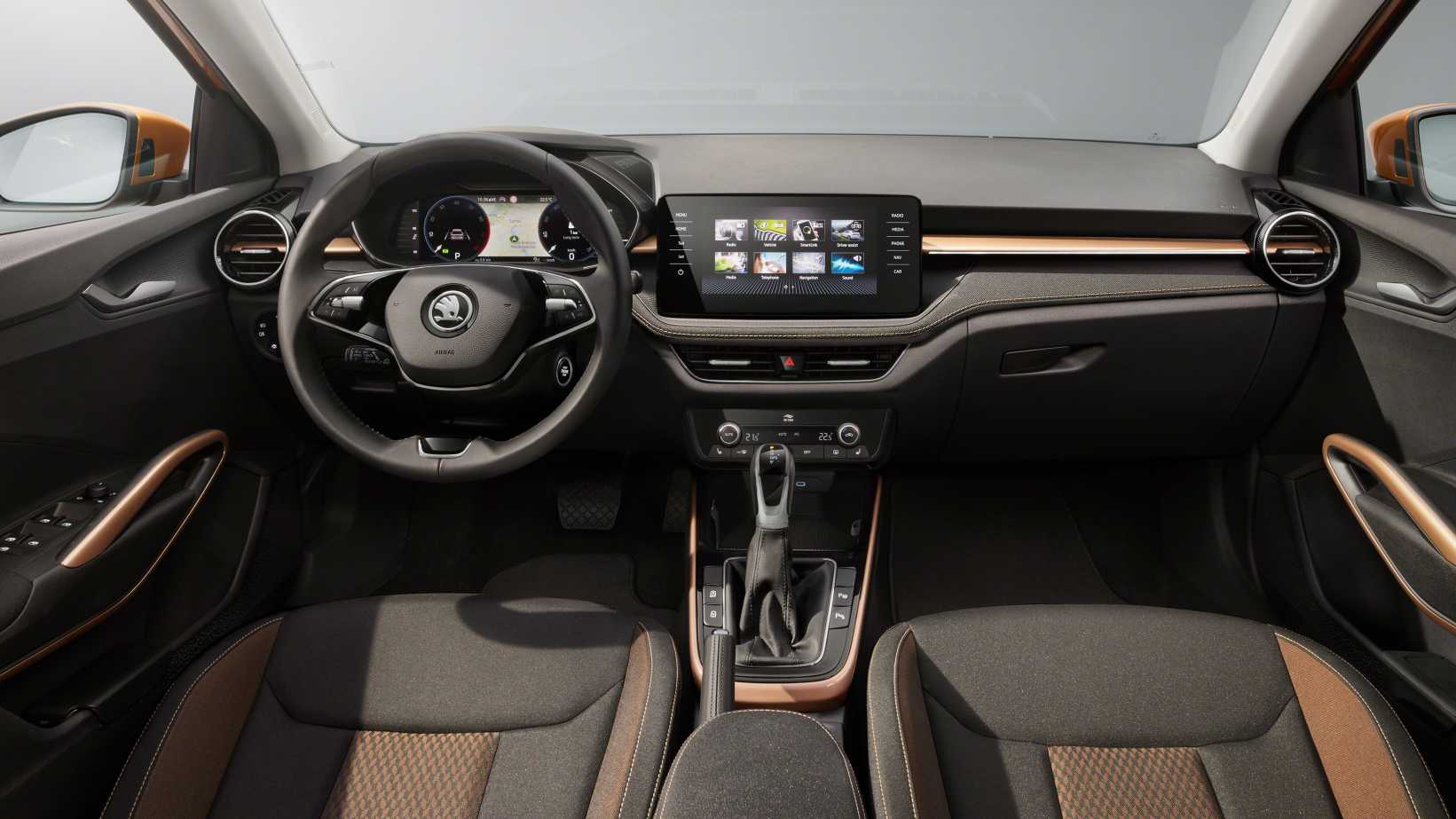 The new Skoda Fabia's interior appears to have plenty in common with the Kushaq's. Image: Skoda

The new Skoda Fabia’s interior will seem quite familiar to most, and that’s because it appears to have lots in common with the Kushaq’s interior. Barring the circular AC vents at each end, the layered dashboard design is a lot like the Kushaq’s, with a similar, freestanding 9.2-inch touchscreen infotainment system (with gesture- and voice-controls) positioned above the central AC vents. However, unlike the Kushaq, the Fabia features physical buttons and knobs for the climate control system, and there are some switches on the centre console as well. Also present are a two-spoke steering wheel and a 10.25-inch ‘Virtual Cockpit’ digital instruments display. Additionally, the new Fabia’s front doors feature an umbrella holder, there’s a large storage bin in between the front seats and the hatchback also gets dedicated rear AC vents and a panoramic glass roof, which will certainly enhance the feeling of roominess inside what should be a pretty spacious cabin anyway. Boot space is rated at 380 litres, and in terms of safety kit, the new Fabia will get as many as nine airbags, along with adaptive cruise control, lane keep assist and blind spot monitoring.

In terms of powertrains, the new Skoda Fabia will be offered only with petrol engines. There will be a total of five engine options to choose from abroad, including a 1.0-litre, naturally-aspirated MPI unit, a 1.0-litre turbocharged TSI engine and the range-topping 1.5-litre TSI turbo-petrol. The 1.0 MPI will be offered in 65 hp and 80 hp versions (with a five-speed manual), while the 1.0 TSI will be available in 95 and 110 hp states of tune (with a six-speed manual and a seven-speed DSG automatic). The 1.5 TSI will only be available in its 150 hp version, paired with the seven-speed DSG auto. The Fabia remains strictly front-wheel-driven, and a spicier vRS version is unlikely to happen.

Now, to the big question: will the fourth-gen model bring back the Fabia nameplate to India? The ingredients are all there – it’s based on a platform that has already been adapted for Indian conditions, and has the same powertrain options as the Kushaq and future Skoda-Volkswagen midsize sedans. However, it’s worth noting the new Fabia is well over four metres in length, so to be eligible for small car benefits, Skoda would need to trim the car down to just under 4,000 mm. Sources close to Skoda India have previously cited a hatchback not being an immediate priority for the company, but seeing as how the Maruti Suzuki Baleno and Hyundai i20 have enjoyed a largely unfettered run in India’s premium hatch market for the better part of the last decade, don’t be surprised to see Skoda roll out a tailored-for-India version of the fourth-gen Fabia in the future.