New Honda Civic makes its world premiere in the US, is longer and more feature-rich

Standouts inside the new Honda Civic are its 10.2-inch digital instruments display and 9.0-inch touchscreen.

Having given the world a clear look at the car a few days ago, Honda has finally revealed the all-new Honda Civic in full. Now in its 11th generation, the Honda Civic has evolved once again from the edgy, striking sedan it was in its outgoing generation, into a more sedate, three-box sedan that aims to build on the strengths of its predecessor. What is clear from pictures of the 2022 Honda Civic is that the production model hasn’t strayed too far from the design of the concept, which debuted last year.

The new Civic sticks to the wide and low stance the world now associates with a Civic, but the design and styling are a complete contrast to the outgoing model. Honda has binned the sharp angles and creases, and the new Civic opts for cleaner surfacing and a more mature look overall. The face of the production-spec Civic looks largely the same as that of the prototype – the LED headlights (with LED DRL eyebrows) are inset into the fascia, with the slim grille placed a little further ahead, and the front bumper houses a large radiator grille, with LED fog lamps placed in the C-shaped housings either side of it.

The bold shoulder line originates from the front fender and extends all the way back to the tail-lights, and the window line has a subtle kink as it stretches back towards to the D-pillar – a nod to the current-gen Accord (on sale abroad). Understandably, the production model ditches the prototype’s 10-spoke, 19-inch alloys in favour of wheels that range from 16- to 18-inches in diameter. A 36 mm increase in wheelbase promises to free up more rear seat space in the 2022 Honda Civic. Image: Honda

Under the skin, the new Honda Civic retains the current model’s underpinnings, but with some key upgrades to add rigidity so the new Civic has better driving dynamics. It has a 36 mm longer wheelbase, as well as wider rear track. 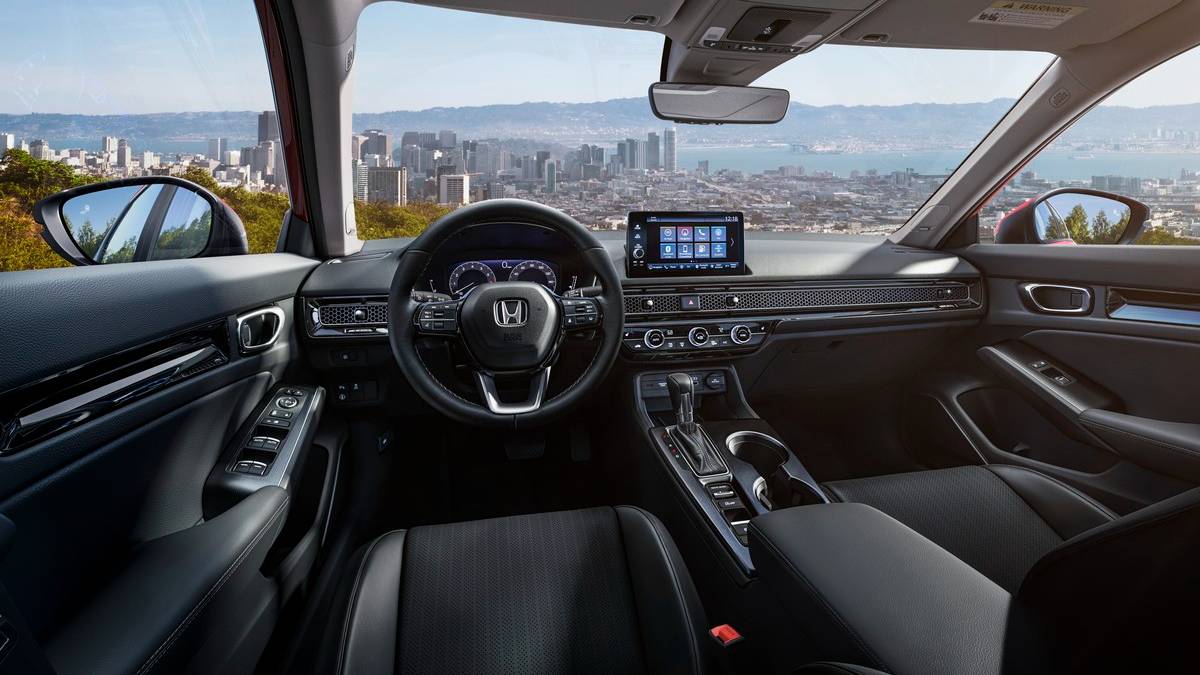 The 2022 Honda Civic sports a twin-screen setup on the inside. Image: Honda

On the inside, the new Honda Civic has a floating 9.0-inch touchscreen (7.0-inch on lower-spec variants), a 10.2-inch screen for the all-digital instruments display and a honeycomb mesh that spans the width of the dash and houses the AC vents. Another key addition is the presence of an electronic parking brake. The increase in wheelbase also frees up a little more room for rear-seat passengers.

Honda has previously confirmed the new Civic gets several active and passive safety features, new airbag designs and driver assistance systems. It features what Honda calls a donut-shaped driver-side airbag, which is said to cradle the head in an accident, and a three-sided passenger airbag, which is claimed to open like a book to enhance protection for the front passenger.

In India, the current-gen Honda Civic was discontinued in 2020 along with the Honda CR-V, as the company closed operations at its Greater Noida plant. The main hurdles for the Civic in India were its lofty price tag as well as weak powertrain combinations, because of which the sedan struggled to find favour even after making a highly anticipated comeback in the Indian market. Given what happened with its predecessor, it seems highly unlikely that the 11th generation Honda Civic will come to India.

Honda fights for its soul after boring people with Civic