The "toasty" camera, as Ingalls calls it, is likely headed for display somewhere at NASA headquarters in Washington, DC, NASA said.

As photographs of NASA's "melted camera" spread like wildfire on the Internet, triggering assumptions of many kinds, the space agency has explained that a grass fire started by the launch of a SpaceX Falcon 9 rocket this week toasted the camera. 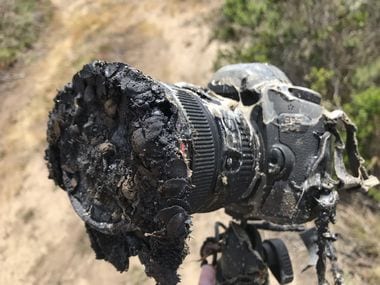 SpaceX launched two new Earth-observing satellites for NASA and five commercial communications satellites for Iridium on a used Falcon 9 rocket in a ride-share mission from Vandenberg Air Force Base in California on 22 May.

The launch went off without a glitch, but a fire sparked by the launch destroyed a camera which belonged to NASA photographer Bill Ingalls.

The camera captured its own demise and people got a chance to view the images captured by it as the memory card was found to be intact.

Many people assumed that the camera was too close to the launchpad and got burned by the power of the Falcon 9 rocket, CNET reported on 25 May.

NASA said that only part of the camera's story has been exposed so far, stressing that Ingalls, who has been shooting for the agency for 30 years, knows where to set up his cameras.

"I had six remotes, two outside the launch pad safety perimeter and four inside," said Ingalls.

"Unfortunately, the launch started a grass fire that toasted one of the cameras outside the perimeter," Ingalls added.

Ironically, the four cameras set up inside the perimeter were undamaged, as was the other remote, NASA said.

The damaged camera was one of the furthest from the pad, a quarter of a mile away.

Once the fire reached the camera, it was quickly engulfed. The body started to melt. When Ingalls returned to the site, firefighters were waiting to greet him.

Recognising the camera was destroyed, Ingalls forced open the body to see if its memory card could be salvaged.

It could, which is why people could see the fire approaching the camera.

The "toasty" camera, as Ingalls calls it, is likely headed for display somewhere at NASA headquarters in Washington, DC, NASA said.

Meanwhile, Ingalls himself will soon travel to Kazakhstan to photograph the 3 June landing of the International Space Station's Expedition 55 crew.

He expects that will be a completely normal assignment.