The image was captured using the narrow angle camera, one of the seven instruments on board the spacecraft.

During the 21 August Solar Eclipse, NASA captured an image of the Moon's shadow over North America, using its Lunar Reconnaissance Orbiter (LRO). The spacecraft was launched on 18 June, 2009 and has been providing researchers with high quality images of the Moon and the Earth since then. 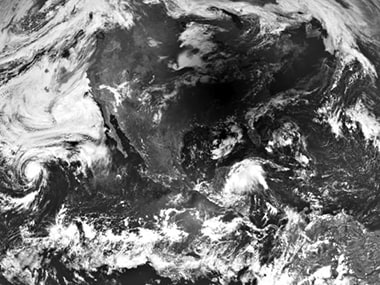 The image was captured using the narrow angle camera, one of the seven instruments on board the spacecraft. Unlike a single exposure that captures the entire image in conventional cameras, the narrow angle camera builds up an image line by line. It takes about 18 seconds to completely acquire the 52,224 lines used in the image. Each line has a very short exposure duration, so that the images are not saturated by reflections from the clouds in the atmosphere.

Normally, the narrow angle camera is pointed towards the surface of the Moon. As the LRO crossed the south pole of the Moon, it began a slow 180 degree turn towards the Earth. Once this maneuver was executed, the LRO captured the shadow of the Moon on the Surface of the Earth, very close to the location where the total solar eclipse lasted the longest.