During its mission of exploration, Juno soars low over the planet's cloud tops — as close as about 3,400 kilometres.

NASA said its Juno spacecraft accomplished a close flyby over Jupiter's churning atmosphere this week, successfully completing its 10th science orbit. The closest approach was at 6.36 a.m. PST on February 7, NASA said in a statement on Thursday. 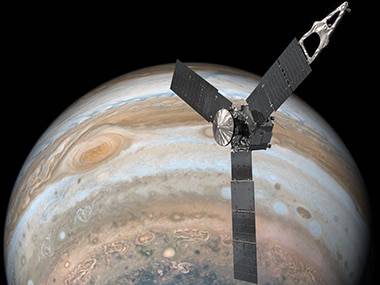 All of Juno's science instruments and the spacecraft's JunoCam were in operation during the flyby, collecting data that is now being returned to Earth, the statement added. Launched on 5 August 2011, Juno recently probed the depths of Jupiter's famous storm, the Great Red Spot.

During its first pass over this iconic feature in July 2017, Juno found that the storm penetrates well below the clouds -- about 300 kilometres into the planet's atmosphere. Jupiter's Great Red Spot is a giant oval of crimson-coloured clouds in Jupiter's southern hemisphere that race counter-clockwise around the oval's perimeter with wind speeds greater than any storm on Earth. It is about 1.3 times as wide as Earth.

The spacecraft arrived in orbit around Jupiter on 4 July, 2016. During its mission of exploration, Juno soars low over the planet's cloud tops — as close as about 3,400 kilometres. During these flybys, Juno is probing beneath the obscuring cloud cover of Jupiter and studying its auroras to learn more about the planet's origins, structure, atmosphere and magnetosphere.