These Hubble observations are the first detections of this "snow-out" process, called a "cold trap," on an exoplanet, researchers said.

Astronomers have used the Hubble Space Telescope to find a blistering-hot giant planet outside our solar system where the atmosphere "snows" titanium dioxide - the active ingredient in sunscreen. These Hubble observations are the first detections of this "snow-out" process, called a "cold trap," on an exoplanet, researchers said. The finding by researchers at Pennsylvania State University in the US provides insight into the complexity of weather and atmospheric composition on exoplanets, and may be useful for gauging the habitability of Earth-size planets. The astronomers suggest that powerful winds on Kepler-13Ab carry the titanium oxide gas around, condensing it into crystalline flakes that form clouds. The planets strong surface gravity - six times greater than Jupiters - then pulls the titanium oxide snow out of the upper atmosphere and traps it in the lower atmosphere on the nighttime side of the planet. The team targeted planet Kepler-13Ab because it is one of the hottest of the known exoplanets. Its dayside temperature is nearly 5,000 degrees Fahrenheit.

Kepler-13Ab is so close to its parent star that it is tidally locked, which means that one side of the planet always faces the host star. As a result, the planet has a perpetual daysight, a side with a neverending night, with a permanent twilight zone between the two.

The team discovered that the sunscreen snowfall happens only on the planets permanent nighttime side. The study, published in The Astronomical Journal, revealed that the giant planets atmosphere is cooler at higher altitudes - which was surprising because it is the opposite of what happens on other hot Jupiters.

Titanium oxide in the atmospheres of other hot Jupiters absorbs light and reradiates it as heat, making the atmosphere grow warmer at higher altitudes. Even at their much colder temperatures, most of our solar systems gas giants also have warmer temperatures at higher altitudes, researchers said. Intrigued by this surprising discovery, the researchers concluded that the light-absorbing gaseous form of titanium oxide has been removed from the dayside of planet Kepler-13Abs atmosphere.

Without the titanium oxide gas to absorb incoming starlight on the daytime side, the atmospheric temperature there grows colder with increasing altitude. Kepler-13Ab was selected for the study as it was one of the hottest known exoplanets. The findings have implications for future searchers of planets with conditions suitable for life as we know it on Earth. 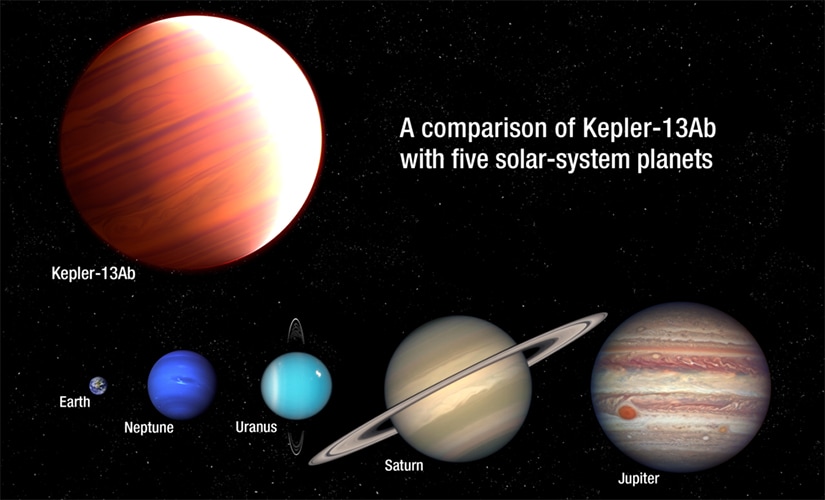 Thomas Beatty, lead researcher of the study says, "In many ways, the atmospheric studies we're doing on hot Jupiters now are testbeds for how we're going to do atmospheric studies on terrestrial, Earth-like planets. Hot Jupiters provide us with the best views of what climates on other worlds are like. Understanding the atmospheres on these planets and how they work, which is not understood in detail, will help us when we study these smaller planets that are harder to see and have more complicated features in their atmospheres."