These observations represent the earliest signs of activity ever seen from a comet entering the solar system's planetary zone for the first time.

NASA's Hubble Space Telescope has captured the farthest active inbound comet ever seen, at a whopping distance of 1.5 billion miles from the Sun. Slightly warmed by the remote Sun, it has already begun to develop an 80,000-mile-wide fuzzy cloud of dust, called a coma, enveloping a tiny, solid nucleus of frozen gas and dust, according to a study published in the Astrophysical Journal Letters. 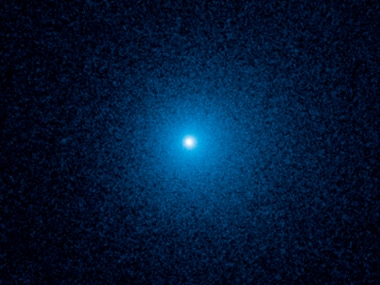 These observations represent the earliest signs of activity ever seen from a comet entering the solar system's planetary zone for the first time. The comet, called C/2017 K2 (PANSTARRS) or "K2", has been travelling for millions of years from its home in the frigid outer reaches of the solar system, where the temperature is about minus 226 degrees Celsius.

Comets are the icy leftovers from the formation of the solar system 4.6 billion years ago and therefore pristine in icy composition. "K2 is so far from the Sun and so cold, we know for sure that the activity -- all the fuzzy stuff making it look like a comet -- is not produced, as in other comets, by the evaporation of water ice," said lead researcher David Jewitt of the University of California, Los Angeles.

"Instead, we think the activity is due to the sublimation (a solid changing directly into a gas) of super-volatiles as K2 makes its maiden entry into the solar system's planetary zone. That's why it's special. This comet is so far away and so incredibly cold that water ice there is frozen like a rock," Jewitt said.

Based on the Hubble observations of K2's coma, Jewitt suggests that sunlight is heating frozen volatile gases - such as oxygen, nitrogen, carbon dioxide, and carbon monoxide - that coat the comet's frigid surface. These icy volatiles lift off from the comet and release dust, forming the coma. Past studies of the composition of comets near the Sun have revealed the same mixture of volatile ices.

"I think these volatiles are spread all through K2, and in the beginning billions of years ago, they were probably all through every comet presently in the Oort Cloud," Jewitt said. "But the volatiles on the surface are the ones that absorb the heat from the Sun, so, in a sense, the comet is shedding its outer skin. Most comets are discovered much closer to the Sun, near Jupiter's orbit, so by the time we see them, these surface volatiles have already been baked off. That's why I think K2 is the most primitive comet we've seen," Jewitt added.