The approach shows the continued relevance of clockwork computers, widely considered to be an outdated technology after the advent of electronics.

Well made watches can keep ticking for decades, and keep working even after being exposed to extreme conditions. NASA is prototyping a rover to check if the same technologies can be used for a rover on Venus. The Automaton Rover for Extreme Environments (AREE) program hopes to avoid using electronics completely, so that the rover can continue to beam back observations from one of the most hellish environments in the solar system. 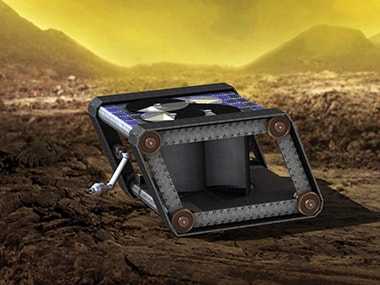 The atmospheric pressure on the surface of Venus can crush most submarines, and the temperature is hot enough to melt lead. Electronics would melt on the surface of Venus, if they are not corroded by the high amount of sulfur in the atmosphere. Jonathan Sauder, a mechanotronics engineer at NASA's Jet Propulsion Laboratory (JPL) first proposed the clockwork rover in 2015. Sauder says, "Venus is too inhospitable for kind of complex control systems you have on a Mars rover. But with a fully mechanical rover, you might be able to survive as long as a year."

No lander on the Venusian surface has survived for more than a few hours. The Russian Vega and Venera landers were the last man made objects to visit the surface of Venus. To tackle the extreme environment, AREE will have a clockwork computer on board, similar Charles Babbage's Analytical Engine, and the Antikythera mechanism, a mysterious object widely believed to be the earliest known mechanical computer.

To traverse the rugged terrain of Venus, AREE will have treads inspired by World War I tanks. In order to communicate with the Earth, the researchers are planning to use another technology considered outdated, morse code. An orbiter can beam down images to the clockwork rover, which can adjust or cover an antenna to reflect back a yes no signal, which can send back information in morse code. The approach shows the continued relevance of clockwork computers, widely considered to be an outdated technology after the advent of electronics.