For the particular study, the researchers used a hypothetical planet with an atmosphere similar to Earth, but with only oceans on the surface. M

NASA funded research has improved the modelling of the climate on exoplanets. Conventional models used so far were very basic and simulated the atmospheric conditions vertically, from the surface upwards. The new model simulates the atmospheric conditions in all three dimensions, allowing researchers to simulate the circulation in the atmosphere, as well as unique characteristics emerging from the circulation. The research allows astronomers to dedicate scarce resources to the exoplanets with the most promising conditions for harbouring life. 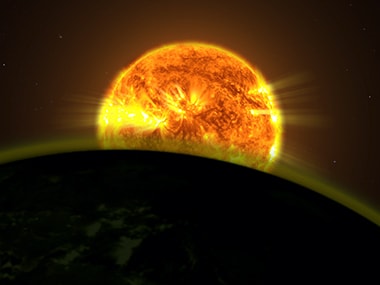 Illustration of a star illuminating the atmosphere of an exoplanet. Image: NASA.

The research has been published in the Astrophysical Journal. Yuka Fujii, lead author of the paper says, "Using a model that more realistically simulates atmospheric conditions, we discovered a new process that controls the habitability of exoplanets and will guide us in identifying candidates for further study."

Low mass stars, that are much cooler and dimmer than the Sun, are the most common type of stars in the galaxy. The number of these stars increases the possibility of finding a habitable world in orbit around one of them, and their smaller size makes it easier for astronomers to detect planets in orbit around them. The presence of water is a pre-requisite for life as we know it on Earth, and the temperature on the surface of the planet should be within a range of temperatures to support life. This means that the planet cannot be too far from or too close to the host star, in a region known as the Goldilocks Zone.

It was previously believed that if a planet was too close to the host star, then the temperatures would be too high to support life. This was especially true for smaller planets closer to the stars, which tend to be tidally locked to the host star because of the influence of the gravity of the star. Tidally locked planets experience one side of perpetual daylight, and another side of neverending night. The new models suggest that the accumulation of water vapour in the atmosphere acts as a shield, absorbing the heat and keeping the temperature on the surface cool enough to support life.

The research would allow astronomers to screen the most promising exoplanet candidates for harbouring life. Real examples of the kind of exoplanets being studied here can be found in the Trappist-1 system, which has seven Earth sized rocky planets tidally locked to an ultracool dwarf star, with all the planets in orbit closer to the star than Mercury is to the Sun.

For the particular study, the researchers used a hypothetical planet with an atmosphere similar to Earth, but with only oceans on the surface. Modifying the distance to the host star allowed the researchers to simulate the amount of water vapour build up in the stratosphere. The researchers plan to vary the gravity, size and atmospheric conditions on the simulated planet, to further understand the effects of water vapour circulation on habitability.