This will enable them to view the eclipse for over seven minutes, while it will last for only two and a half minutes for other viewers.

For the upcoming total solar eclipse, a team of NASA-funded scientists are planning to observe the solar corona using stabilised telescopes aboard two of the space agencys research aircraft.

Scientists, led by Amir Caspi from the Southwest Research Institute in Colorado, will use two of NASA's retrofitted WB-57F research jets to follow the shadow of the moon across America on August 21.

This will enable them to view the eclipse for over seven minutes, while it will last for only two and a half minutes for other viewers. 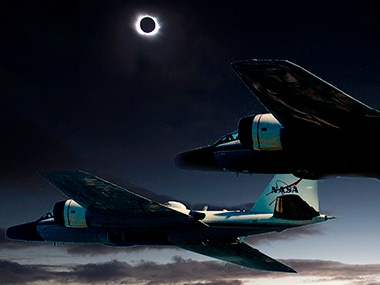 Taking observations from twin telescopes mounted on the noses of the planes, the scientists will capture the clearest images of the sun's outer atmosphere - the corona - to date and the first-ever thermal images of Mercury, revealing how temperature varies across the planet's surface.

"These could well turn out to be the best ever observations of high frequency phenomena in the corona," said Dan

Seaton, co-investigator of the project and researcher at the University of Colorado in Boulder, US. "Extending the observing time and going to very high altitude might allow us to see a few events or track waves that would be essentially invisible in just two minutes of observations from the ground," Seaton added.

The two planes to be launched from Ellington Field near NASA's Johnson Space Center in Houston will observe the total eclipse for about three and a half minutes each as they fly over Missouri, Illinois and Tennessee.

Images of the Sun will primarily be captured at visible light wavelengths, specifically the green light given off by highly ionized iron, superheated by the corona.

This light is best for showing the fine structures in the sun's outer atmosphere.

Observations of Mercury will also be taken half an hour before and after totality, when the sky is still relatively dark. These images, taken in the infrared, will be the first attempt to map the variation of temperature across the surface of the planet.

NASA is funding 11 science projects across America for scientists to take advantage of the unique astronomical event to learn more about the sun and its effects on earth's upper atmosphere.