Although most of the technology NASA needs for such a mission does not exist yet, it could involve travelling at one-tenth the speed of light.

To look for signs of life beyond our solar system, the US space agency could send a spacecraft to the nearby Alpha Centauri system by 2069, according to a mission concept presented by a NASA scientist. 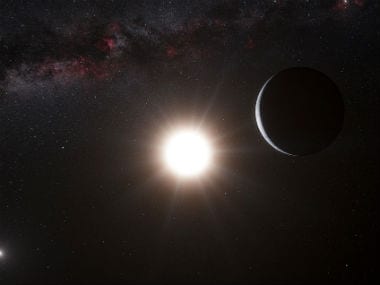 Details of the mission concept was presented by Anthony Freeman of NASA's Jet Propulsion Laboratory at the 2017 American Geophysical Union conference in New Orleans, Louisiana, the New Scientist reported.

Although most of the technology NASA needs for such a mission does not exist yet, it could involve travelling at one-tenth the speed of light.

The impetus came from a 2016 US funding bill telling NASA to study interstellar travel that could reach at least 10 percent of the speed of light by 2069, the report said.

The Alpha Centauri star system, located in the constellation of Centaurus at a distance of 4.3 light-years from Earth, is the closest star system to the Earth. It has three stars, Centauri A, Centauri B, and Proxima Centauri.

The European Southern Observatory (ESO) discovered in 2016 an Earth-sized planet that orbits in the habitable zone around Proxima Centauri.

New research, published in the Astronomical Journal, suggests that there may some small, Earth-like planets around Alpha Centauri A and B as well.

Right now, only one human-made spacecraft has left our solar system,Voyager 1, which had launched 40 years ago and is currently travelling at about 38,000 miles per hour, less than one percent of one percent of the speed of light, the Newsweek reported.