During the BOSCO series of test flights, the images were captured in the split second that the aircraft passed directly in front of the Sun. 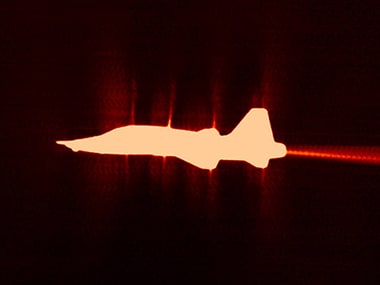 A step towards the development of the X-Plane is the Low Boom Flight Demonstration (LBFD), which will demonstrate that the future X-Plane will not produce the alarmingly loud sonic booms. To capture the shockwaves of the LBFD moving from subsonic to supersonic flight, NASA will have to use a technique called Schlieren photography, and check if the observed shockwaves match with the ones predicted during the design process.

During a series of flights in 2016, NASA tested out a technique called Background Oriented Schlieren using Celestial Objects (BOSCO), that used the Sun as a background to capture the shockwaves from a supersonic aircraft. The aircraft used for the test was a Northrop T-38 Talon, a twin jet supersonic aircraft used for training purposes. The aircraft was travelling at an altitude of 40,000 feet. However, the LBFD will fly at an altitude of 60,000 feet, which would require NASA to capture the requisite Schlieren imagery by mounting the equipment on another aircraft.

With the second phase of the BOSCO tests, called BOSCO II, NASA managed to validate the system by capturing Schlieren imagery from an aircraft flying at an altitude of 10,000 feet.

Mike Hill, principal investigator of BOSCO II said, "The main objective here was to see what the image looks like at close range, including what kind of shockwave structure we can make out. We needed to use our new compact camera system in order to get an idea of the quality of the images of those shockwaves using a smaller system."

During the BOSCO series of test flights, the images were captured in the split-second that the aircraft passed directly in front of the Sun. The first series of BOSCO tests in 2016, required the aircraft to hit a relatively large window, 300 feet wide. However, for the BOSCO II series of tests, the images had to be captured within a portion of the sky just 100 feet wide. The new tests have provided NASA with the experience on how to manage the new system and has validated the quality of the images captured by the more compact system. The imaging systems and hardware can now be integrated with the high-speed chase aircraft that will capture the sonic booms of the LBFD when it flies in 2022.