The return of former boss Nandan Nilekani to Infosys is intended as a return to normality for investors and the tech company’s 200,000 employees, drawing a line under the bitter public battle between board members and founders. 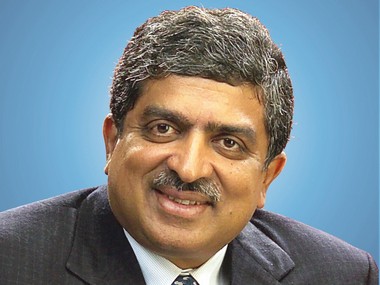 The dramatic exit of Infosys’ chief executive Vishal Sikka late last week took uncertainty to new highs and prompted several days of falling shares. A group of 12 major institutional investors wrote to ask for Nilekani - one of Infosys’ seven co-founders, though largely absent from the spat - to come back on the board.

He was appointed on Thursday.

But Nilekani, a respected, jovial figure familiar from Davos debates and television commentary, faces an unenviable challenge as he comes back to the Infosys fold, a decade since his departure.

He is returning as chairman to a different Infosys than the one he left when he stepped down as co-chairman to run India’s national ID project in 2009, having first served as chief executive from 2002 to 2007 and quadrupled revenues during that tenure.

Nilekani was a pioneer in the outsourcing industry - famously telling journalist Thomas Friedman that it had made the world ’flat’. But while he was away, rolling out India’s billion-strong biometric database, the IT industry shifted.

It is now facing unprecedented challenges: the traditional outsourcing business faces a margin squeeze and newer ventures have yet to make money. Anticipated work visa changes in the United States, the biggest market for Indian IT firms, could also become a headache for the company.

“To that extent he has now put his reputation at stake, his name will get associated whether the company will be successful or not,” said Shah.

Nilekani should be aware of what’s in store. In 2013, when Infosys faced another crisis, co-founder Narayana Murthy returned to the group and is reported to have asked Nilekani to join him. He refused.

He will also need to move fast on staff, first recruiting a chief executive to replace Sikka, whose dramatic departure last Friday triggered a drop in the shares. Sikka, who joined Infosys from German software giant SAP, pushed it to adopt automation and venture into transformational high-margin areas like big data, cloud and analytics.

Nilekani, who together with family owns about 2.3 percent of Infosys and is worth $1.7 billion according to Forbes, is known for his networking talent - something he will need to tap.

“Nandan’s a global face, he’s well connected... he has a track record of running Infosys as a CEO,” said V. Balakrishnan, a former finance chief of Infosys who still owns shares.

“What’s required is a face which will give comfort, help to restructure the board and hire a new CEO.”

But he will also need to tackle broader retention. Sikka’s departure rattled the rank-and-file and senior level executives critical to rolling out its strategy and retaining clients.

Analysts had warned that the growing uncertainty could spur some of Infosys' top talent to jump ship and headhunters had reported a rise in the number of inquiries from senior Infosys executives looking to move.

With Sikka at the helm, Infosys revamped its uptight work culture - from relaxing a formal dress code to allowing staff to check Facebook or Twitter during work hours. Infosys also tried to copy nimbler startups, by getting people to work in huddles, and encouraging creative events like hackathons.

The moves, part of a plan to attract top tech talent, marked a big cultural shift from the Infosys run by Nilekani.

Infosys' interim CEO Pravin Rao told employees on Thursday, in an internal memo, that the appointment was a "major milestone in ensuring the smooth transition of our organization," adding the change would allow Infosys to deliver on promises made.