The laptop does cost a little over Rs 1.2 lakhs and issues like USB 2.0, soft speakers, and the tendency to run hot just can’t be ignored.

MSI’s Creator line of laptops have always intrigued me. They’re a breed of laptop that seem specced like gaming laptops, but target creative professionals with features designed to cater to their needs. It’s a nice idea on paper, but cramming hot, powerful hardware in a thin and light chassis might not be the best of ideas.

The first laptop of this line that I’d reviewed, the PS63 Modern (Review), disappointed for this exact reason. Does the Prestige 14 follow in the same footsteps or have things improved this time around? 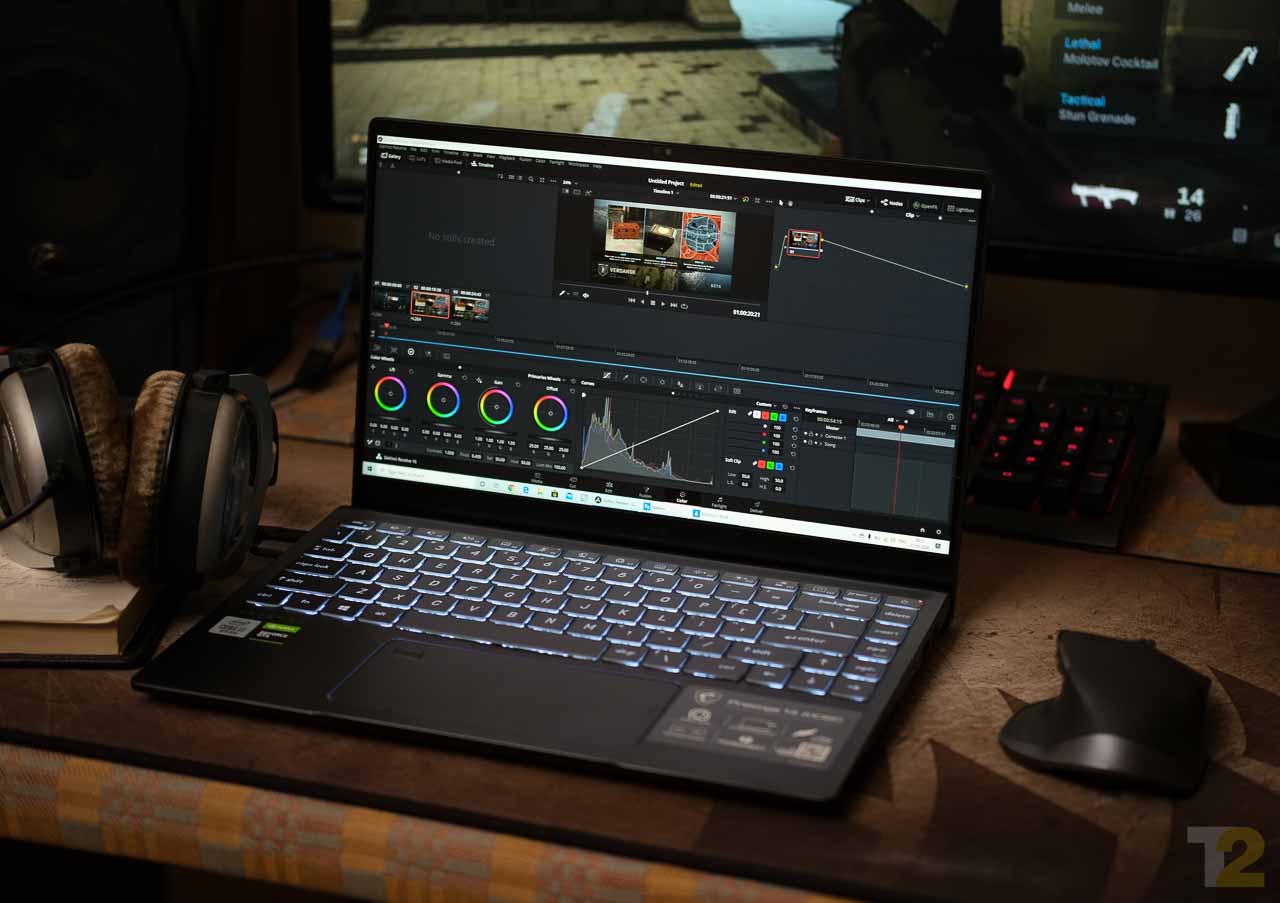 MSI Prestige 14 A10SC packs in some very decent hardware. It's too bad that the design can't handle the thermal load, however. Image: Anirudh Regidi

Let’s start with the screen

At 220 nits, the brightness is about average, as is the ~90 percent sRGB coverage. Indoors, the screen is bright and contrasty enough, and for photo and video editing, it is indeed enough. You won’t be able to edit wide gamut images or video on this machine, but at this price, only the MacBook Pro will be able to do that. My only complaint is the slight yellow cast to the display.

The display hinge itself rotates by 180 degrees, which means you can have the display lay flat if you do desire. This is nice when you’re using the laptop in bed, say, and you have it propped up on your knees. MSI Prestige 14's screen only hits about 90 percent sRGB coverage. This is good enough for the average user, but professionals will want a better screen. Image: Anirudh Regidi

Powering this machine is an Intel Core i7-10710U (Comet Lake) CPU that’s paired with 16 GB LPDDR3 RAM, a 512 GB NVMe SSD, and an Nvidia GeForce GTX 1650 MaxQ GPU. MaxQ means that GPU performance is tuned for power efficiency rather than raw pixel-pushing ability, which should translate to decent battery life and poor gaming performance. And also less heat — the Achilles Heel of the PS63.

As it turns out, this is mostly the case. The GPU is powerful enough for Photoshop and Lightroom but I still saw plenty of frame-drops and stuttering in Premiere Pro and Resolve 16. Multi-track edits saw the fans ramping up to full with the CPU maxing out at around 2.3 GHz under load. There was also a tonne of heat, though not as much as on the PS63. 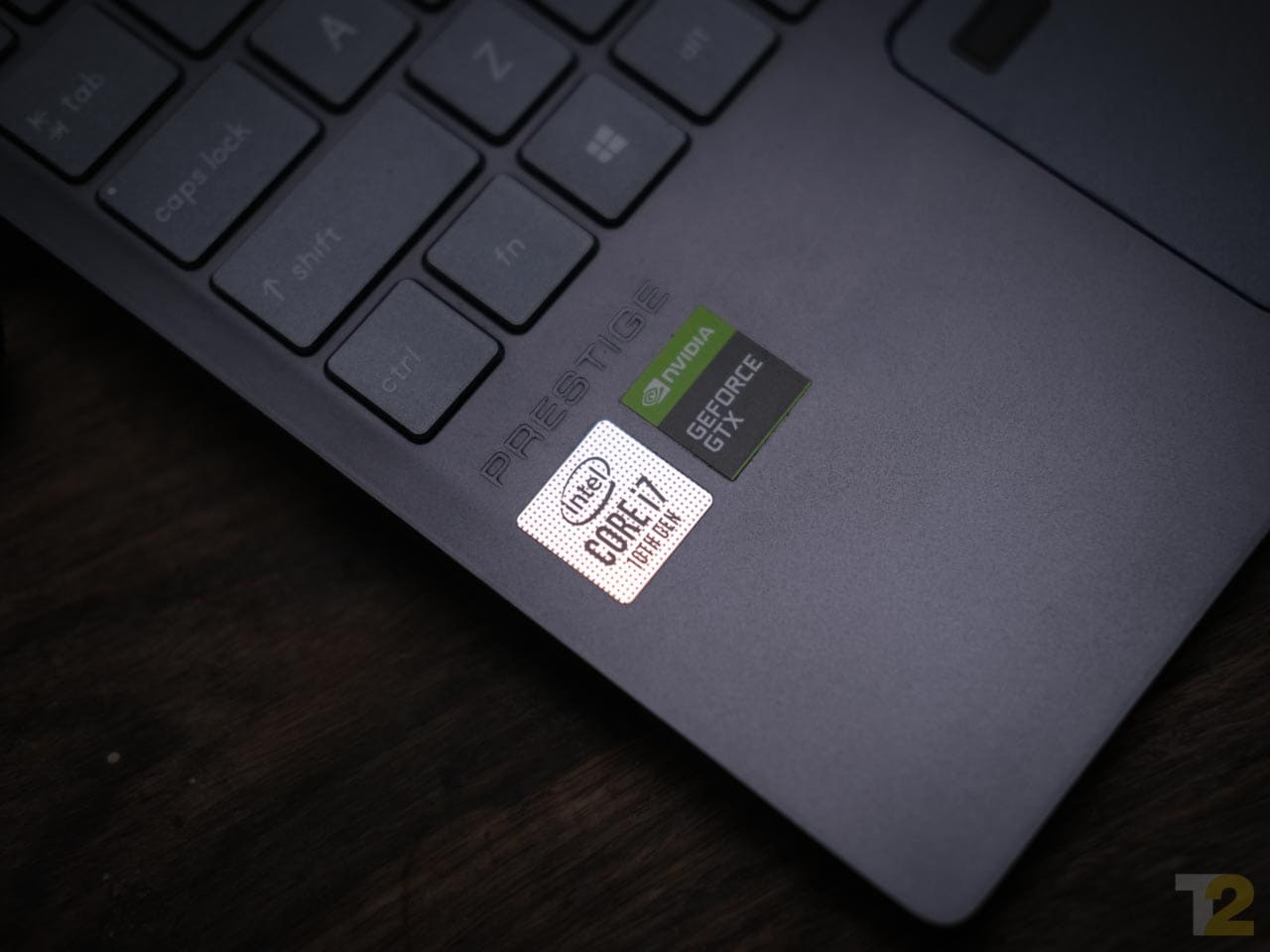 The Comet Lake i7 and GTX 1650 MaxQ are a good combo for content creators. The problem is that the laptop's thermal design doesn't let them reach peak performance. Image: Anirudh Regidi

Games like Apex Legends barely run at their lowest settings, and 60 fps PUBG is possible, but only at very low settings. Lighter games like Ori and the Blind Forest do run smoothly, however.

This performance is not great, but I also can’t think of another Windows device in this 13/14-inch Ultrabook class that performs any better. If you jump operating systems, however, I do believe that the gold standard for creatives, the MacBook Pro, will outperform the Prestige 14. The MacBook’s Iris Plus graphics chip, while not as powerful as the GTX 1650, is powerful enough for creative work, and it’ll draw far less power. The speakers and screen are also far better. Additionally, I’ve edited 4K video on an entry-level 13-inch MacBook Pro, so I know I’m not expecting the impossible from the Prestige 14.

The only advantage the 1650 brings to the table is NVENC, an Nvidia-specific codec that can tremendously accelerate video encoding and transcoding. In my tests, a 23-minute 1440p 60 fps file was converted to a 1080p 30 fps clip in about 35 minutes using NVENC vs 85 minutes via the CPU alone.

If it wasn’t for NVENC, I’d have written off this laptop as yet another overheating PS63, but things are still not looking that great for the Prestige 14. To summarise:

Video exporting: H.265 export via Nvenc is fast. A tonne of heat.

MSI includes various profiles and modes that are supposed to optimise performance for various applications. I found these profiles to have no noticeable impact on performance.

… is non-existent. The screen is nice, but the speakers are barely audible. In fact, even the fan noise can drown out the speakers at times. The onboard DAC is decent for headphones, however. While it's nice that there are USB-A ports here, I can't figure out why they're limited to USB 2.0 speeds. Image: Anirudh Regidi

The laptop doesn’t have an HDMI or DisplayPort output, but it does support USB 3.1 Gen2 via USB-C, which means you need a dongle.

And that’s another thing with this laptop. You get two regular USB Type-A ports, but they’re USB 2.0. Why would anyone in 2020 want a premium laptop with USB 2.0 ports? These ports are so slow that you’ll bottleneck a USB hard disk by at least 30 percent when you plug it into that port.

Oh, and why is there a microSD card slot? What am I supposed to do with it?

Battery life is fine. I managed about 4-5 hrs for regular office work, which involves Chrome, Word, and Photoshop. It’s not a lot to look forward to, but the laptop does have a 1650 and dedicated GPUs tend to draw a lot of power. 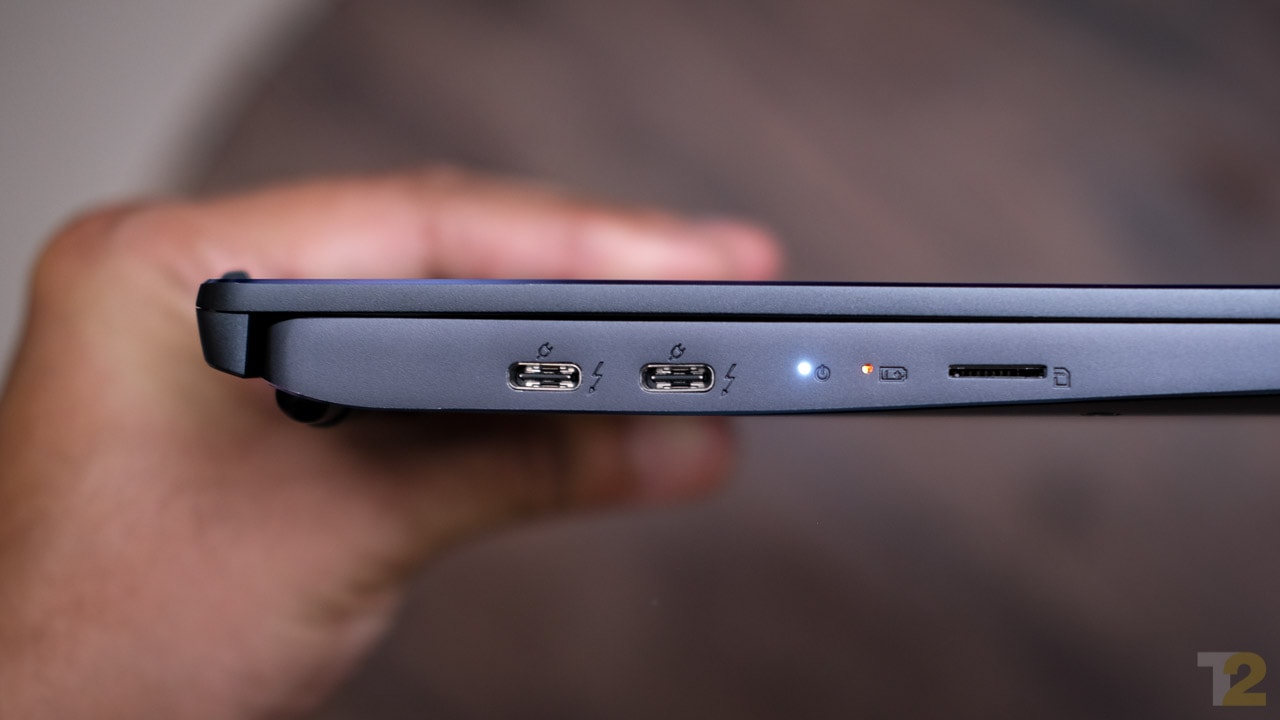 USB-C charging is very convenient, as is the fact that these ports are rated at USB 3.2 Gen2 speeds (10 Gbps). Image: Anirudh Regidi

Thankfully, charging happens via USB-C, so any charger rated for USB PD that’s powerful enough for this laptop can be used. This includes iPad and MacBook chargers. Charging from zero to 100 takes about 2 hrs.

I haven’t been able to figure out what niche the Prestige 14 fills. It’s a shame, really, because I like the design of the Prestige 14. Sadly, the device does cost a little over Rs 1.2 lakhs and issues like USB 2.0, soft speakers, and the tendency to run hot just can’t be ignored.

I can, maybe, see the Prestige 14 being used as a secondary laptop for tasks like streaming or transcoding, but beyond that, I’m not sure if there’s much value in what it offers.