The 2020 avatar, dubbed the GS66, is a little more stealthy, a lot more powerful, but also not as unique or special as the GS65 once was.

When I reviewed the MSI GS65 Stealth in 2018, I was blown away by how thin and light it was, especially given the performance on tap. It was easily my favourite gaming laptop that year.

The 2020 avatar, dubbed the GS66, is a little more stealthy, a lot more powerful, but also not as unique or special as the GS65 once was.

It scores a solid ‘meh’ on the performance front, ditto on design, and about the same on speakers and display quality. This year’s MSI GS66 goes for a stealthier, all-black look that does work, but I prefer the muted gold accents of 2018’s GS65 variant. Performance is also not as exciting this time around. Image: Anirudh Regidi

In 2018, the idea of a slim and light gaming laptop was something relatively new. Few companies had managed to balance performance and form factor, and fewer still managed to sell their devices at a reasonable price.

In 2020, however, Nvidia’s low power Max-Q GPUs are now the default, CPUs are a lot more efficient, and high-refresh rate displays are the norm. 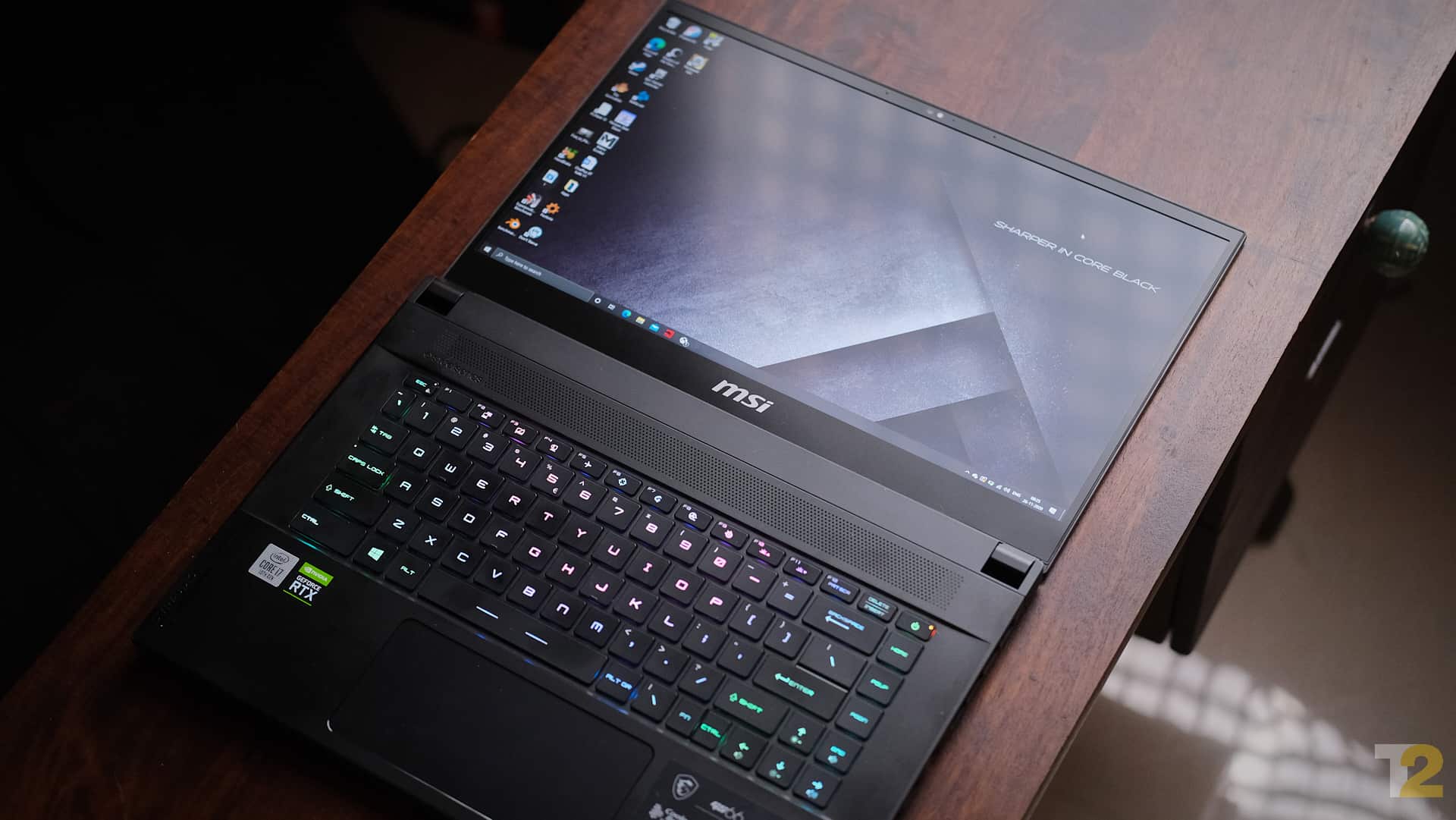 For what it’s worth, the GS66’s display can lay flat, thanks to that 180° hinge. Image: Anirudh Regidi The I/O options are quite generous, and you even get a Thunderbolt 3 port with support DisplayPort and USB Power Delivery up to 100 W. Image: Anirudh Regidi

You also get an IR webcam that’s compatible with Windows Hello, and a SteelSeries keyboard with per-key RGB lighting.

The design is an all black affair, perhaps to keep it in line with the laptop’s ‘stealth’ theme, and it does look pretty stealthy, I guess. That being said, I preferred the muted gold lining and gold MSI Dragon logo on the GS65. It added a bit of understated flair to what would otherwise have been a very plain laptop.

Build quality has improved somewhat from 2018’s GS65, a much-needed improvement given the amount of flex in that laptop’s chassis. The quality is still not in the same league as what I’ve seen from MSI’s competitors, though.

Performance is pretty decent overall, but it’s nothing special. At max settings and with RTX enabled where possible, I saw about 55 fps in Borderlands 3, 77 fps in Modern Warfare’s campaign, 68 fps in The Division 2, and a very playable 50 fps in Metro Exodus. Overall, these figures put the laptop about 15–20% behind competing laptops like the ASUS ROG Zephyrus S15.

I saw similar results in productivity tests as well. Video conversion took about 5 minutes longer than on the S15, GeekBench scores were 20 percent lower, and even Lightroom and Photoshop performance was a lot slower. Performance also dropped off more dramatically on battery than it did on the S15. Overall performance is quite decent, but compared to the competition, the GS66 can’t hold its own.

Heat is a real problem, and I don’t see much improvement compared to what I saw a couple of years ago on the GS65. The keyboard area — especially under that all-important WASD region — gets very hot after about 15 minutes of gaming, and the fans can get quite loud. The heat also appears to be impacting CPU performance, which throttles significantly in CPU-bound tests. In fact, it’s quite likely that poor thermal management is resulting in the relatively poor performance of the machine. Poor thermal management means that the CPU heats up very quickly, resulting in a rather dramatic drop off in performance in CPU-bound productivity workloads.

The rest of the features aren’t that exciting. The 300 Hz display is superb for gaming, but it only manages 96 nits of brightness when running at 300 Hz. This is half of what most laptops offer.

The speakers are loud enough but lack any bass. The cheapest iPad sounds better. This is a decent laptop, but the design is getting long in the tooth. Image: Anirudh Regidi

The MSI GS66 Stealth is officially priced at a ridiculous 2,91,990. That’s Rs 45,000 higher than both Zephyrus models. Thankfully, Flipkart and Amazon are both listing the device at a more reasonable Rs 2,54,000 and Rs 2,69,000 respectively. In either case, the GS66 is simply too expensive for what it’s offering.

It’s a decent enough laptop, but unless the price drops significantly, I simply cannot recommend the GS66 to anyone.