Motorola's Gamepad Moto Mod available for pre-order in the US for $79.99

Motorola Gamepad Moto Mod that was announced at Mobile World Congress in Barcelona earlier this year, is now available for pre-order on Verizon for $79.99.

Motorola Gamepad Moto Mod that was announced at Mobile World Congress in Barcelona earlier this year, is now available for pre-order on Verizon for $79.99.

The Gamepad Moto Mod can be slapped on the back of any compatible phone in the Moto Z line-up to transform it into a portable gaming console with physical controls.The Gamepad comes with two separate control sticks on either side along with a D-pad and a set of action buttons. 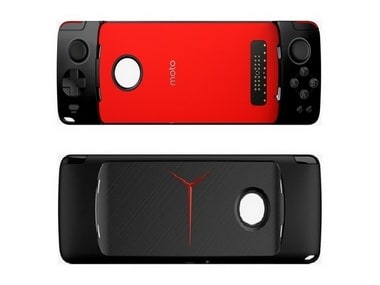 While the Gamepad Mod functions like a regular mobile game controller, it requires no wires or Bluetooth pairing to use. Motorola also boasts of up to eight hours of battery life from a single charge of the 1035 mAh built-in battery.

According to a report by GSMArena, the GamePad Mod is exclusive to Verizon as of now, however, sales of the device will be open to all and not be locked down only to the carrier's customers. Shipments are scheduled to begin 25 August onwards.

Lenovo-owned Motorola had last month unveiled six new Moto Mods at an event in Ghana, including a 360-degree camera mod as well as a DSLR mod. The company had promised the launch of 12 Moto Mods each year back at Mobile World Congress 2017 and are looking towards its fulfillment, the Gamepad Moto Mod being the first of the mods to be ready for mass production.