The JBL SoundBoost 2 is an increment on the SoundBoost 1 introduced last year on the Moto Z family and turns your phone into a kind of miniature boombox.

Motorolla is finally launching it's new Moto Mods in India, which it had introduced just a while back alongside the Moto Z2 Play. The Moto mods are the GamePad Mod, JBL SoundBoost 2 speaker Mod and the TurboPower Pack battery Mod. The Mods are expected to be available on Flipkart from 17 December onwards. 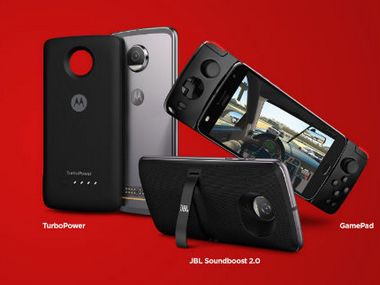 The Mods are more like cases for the Moto Z family and snap on the back like one. The GamePad Mod lets you play games like on a console controller and includes dual joysticks and four action buttons. The GamePad has a 1,035 mAh battery, giving up to eight hours of gaming time. The Mod will retail at a price of Rs 6,999.

The JBL SoundBoost 2 is an increment on the SoundBoost 1 introduced last year on the Moto Z family and turns your phone into a kind of miniature boombox. It is also water resistant and has up to 10 hours of battery life with fast charging support. The JBL SoundBoost will retail at Rs 6,999 as well.

The Turbo PowerPack gives the device up to one day of extra battery life and also comes with fast charge support. The Mod is said to be capable of charging your device to  50 percent in 20 minutes with its fast charging support. The Turbo PowerPack will retail at a price of Rs 5,999. In addition to this, all the mods can also be rented for Rs 399 a week from RentoMojo, with whom Motorolla has a partnership, according to Indian Express.

The three mods were first announced alongside the release of the Moto Z2 Play.

Lenovo launches Moto Z2 Play in India for Rs 27,999; goes on sale from 15 June on Flipkart

Motorola opens six Moto Hubs in Delhi and Mumbai; plans to open 50 more by the end of the year