The Motorola Moto Z2 Force Edition offers the latest and greatest hardware that the industry has on offer today.

Lenovo-owned Motorola has just launched its Moto Z2 Force Edition flagship smartphone along with a new Moto 360 Camera Mod. The smartphone and the new Mod was announced at its MotoWorld event held in New York. The Moto Z2 Force has been priced at $799.99 and can be pre-ordered in the US starting 26 July. The Moto 360 Camera Mod has been priced at $299.99 and is also available for pre-order starting 26 July. The Moto Z2 Force Edition offers the latest and greatest hardware that the industry has on offer today. The device features an all-metal design, which looks very similar to the Moto Z2 Play smartphone that was launched in India in June. There's a 5.5-inch Quad HD POLED display with Motorola's ShatterShield technology. However, the overall design is slimmer and its the hardware inside, along with Motorola's first dual camera module that's the highlight here.

Motorola decided to go with the latest chipset from Qualcomm called the Snapdragon 835. The mobile processor is clocked at 2.35 GHz and features an octa-core setup with an Adreno 540 GPU handling the graphics.

There's 4 GB of RAM and 64 GB of internal storage that comes with microSD card expansion supporting cards of up to 2 TB.

The camera is indeed the focus of the flagship smartphone and Motorola finally took the leap with a dual camera setup. There's two 12 MP Sony IMX 386 sensors (1 with a Bayer, the second without) with a f/2.0 aperture. Speeding them up is the phase detection autofocus system (PDAF) assisted by a laser auto focus mechanism. However, there is no optical image stabilisation (OIS) but you do get a dual LED flash. All of the above circuitry has been given a water repellent nano-coating but the device is not splash-proof nor water and dust resistant (comes with IP ratings). The handset is powered by Android 7.1.1 with an expected update to Android O. 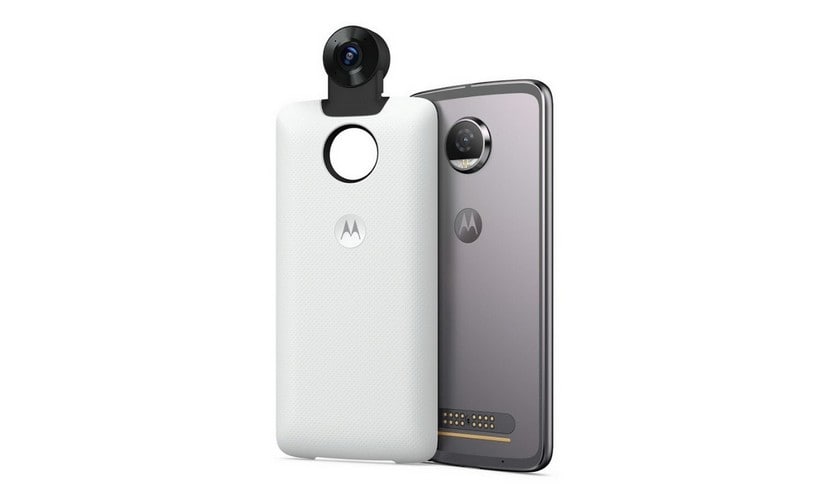 Also launched was the new Moto 360 Camera Mod. The Mod can capture 360 degree, video, audio and images quickly and without hassle. The unit that can be slapped on to the back of the Z2 Force Edition is also capable of shooting 360 video in 4K with 3D sound. The new Mod also works with other smartphones from the Moto Z family.

The Moto Z2 Force Edition will be available in Super Black and Fine Gold. As of now Moto has not announced global availability of the device.