Lenovo-owned Motorola has launched a new Moto Mod for printing pictures instantly. The mod, called the 'Polaroid Insta-Share Printer' can be attached to the Moto Z series of smartphones, the only smartphones that supports Moto Mods for printing the photographs. The new Insta-Share Printer Moto Mod is priced at $199 and is available at Verizon this week. The Printer Mod will be available in other markets in coming months. 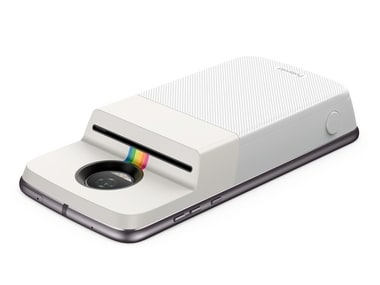 The company in a blog post mentioned that the Mod is easy to use and a picture can be printed by plugging in the Mod to the smartphone and then launching the camera with the physical button to take a picture. Once the picture is taken, it can be printed on a 2×3” Polaroid Premium ZINK® Zero-Ink® Paper. The paper comes with an adhesive back which can be peeled off to paste the picture anywhere. According to the company, the printer prints smudge-proof photo without the hassle of using ink.

The printer mod also allows the users to print customised pictures from various social media platforms and photo galleries including Facebook, Instagram and Google Photos. A picture with filters, borders and text can also be printed from the device.