Moto has not announced any details about the launch or the lineup for this year but this leak hints at the immediate launch of these devices.

Motorola’s unreleased upcoming device line-up as part of its Moto G family and Moto E family has been spotted on the internet for certifications.

The company has not announced any details about the launch or the lineup for this year, but this leak hints at the immediate launch of these devices. This works in favour of the company as it is 2018 and an increasing number of the companies have either launched or announced plans for the devices that they are going to launch this year.

Smartphone companies that are competing for the entry-level, budget and mid-range line up such as Xiaomi have not only announced but also launched their line up for the year. 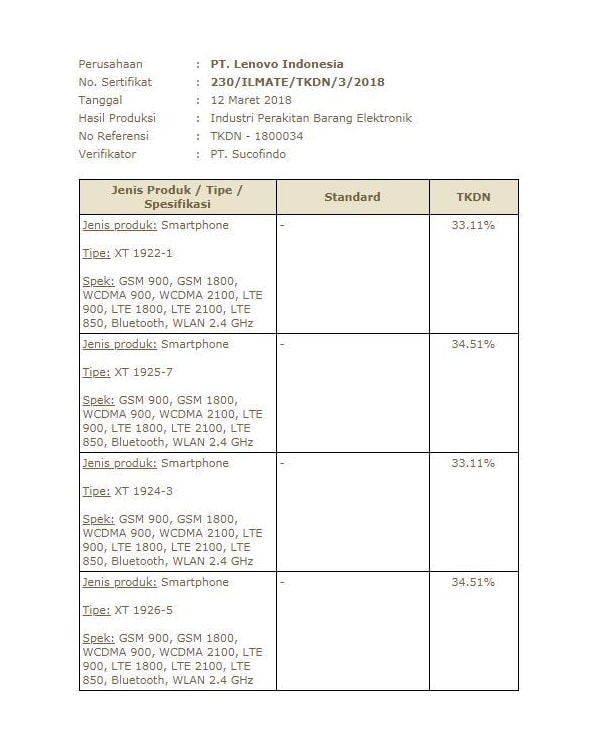 TKDN and NBTC are equivalent to TENAA in China that certifies that the device is compliant with a set of standards. The report pointed out that the company is focusing heavily on the Asian market with the G6 range before launching them in the Western market.

In addition to the G6 line-up, E5 series has also been spotted on certification website with mode number XT1944-6 which could be the Moto E5 Play and model number XT1924-3, the Moto E5.

According to the report, Motorola has gone ahead with the Qualcomm Snapdragon 430 SoC for Moto G6 instead of a more updated Snapdragon 450. On the other hand, G6 Plus will come with Snapdragon 630 SoC along with 4 GB RAM. It will also come with 6 GB RAM variant packing more storage. As for other specifications, the device will come with an FHD+ 5.93-inch display and 3,250 mAh battery. Interested buyers will have the option to buy the device in Gold, White, Blue, Silver and Cyan colours.