Lenovo, the parent company of Motorola has announced the launch of its latest devices, the Moto G5S and G5S Plus for the Indian market. These two devices are the 2017 upgrades to the G5 and G5 Plus. The company wants to ensure that they maintain their strong grip over the budget market in India with the highly successful G series. 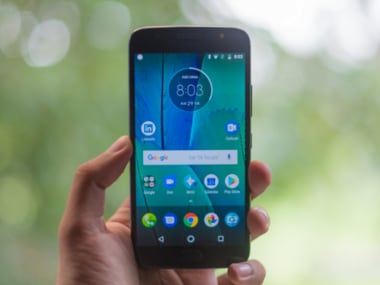 The Moto G5s Plus

The company has priced the devices competitively at Rs 15,999. But, the likes of the Xiaomi Mi Max 2 will give it tough competition. Both the Moto G5S and G5S Plus will be available on Amazon and Moto Hub starting 11.59 pm on 29th August.

We reviewed the G5 Plus and concluded that Lenovo was following the script but build quality and camera needed polish. We got our hands on the Moto G5S Plus, the more expensive of the two devices launched today. The smartphone looks stellar and packs a dual camera setup which is a first for the company at this price point but does it improve over the previous version? Let’s have a quick look at how the Moto G5S Plus fares.

Motorola has opted for a full aluminium unibody design for the G5S Plus. The company claims that the body has been carved out of a single block of metal to ensure that the smartphone looks great and feels sturdy in hand without any squeaking parts. 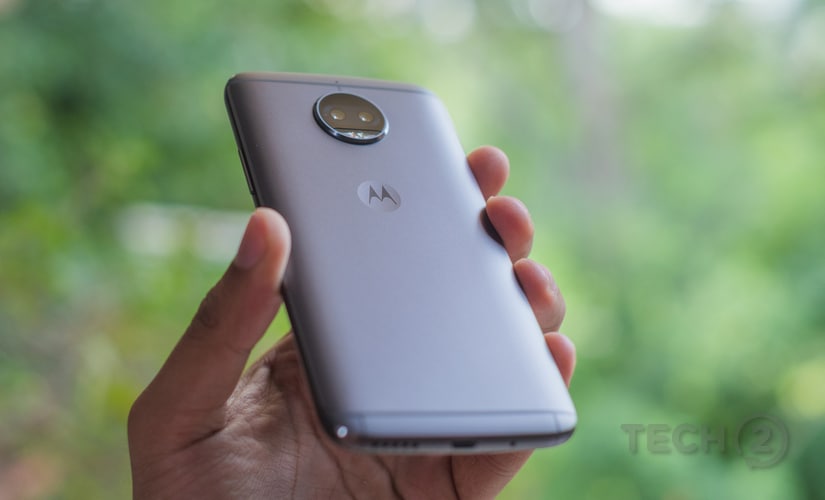 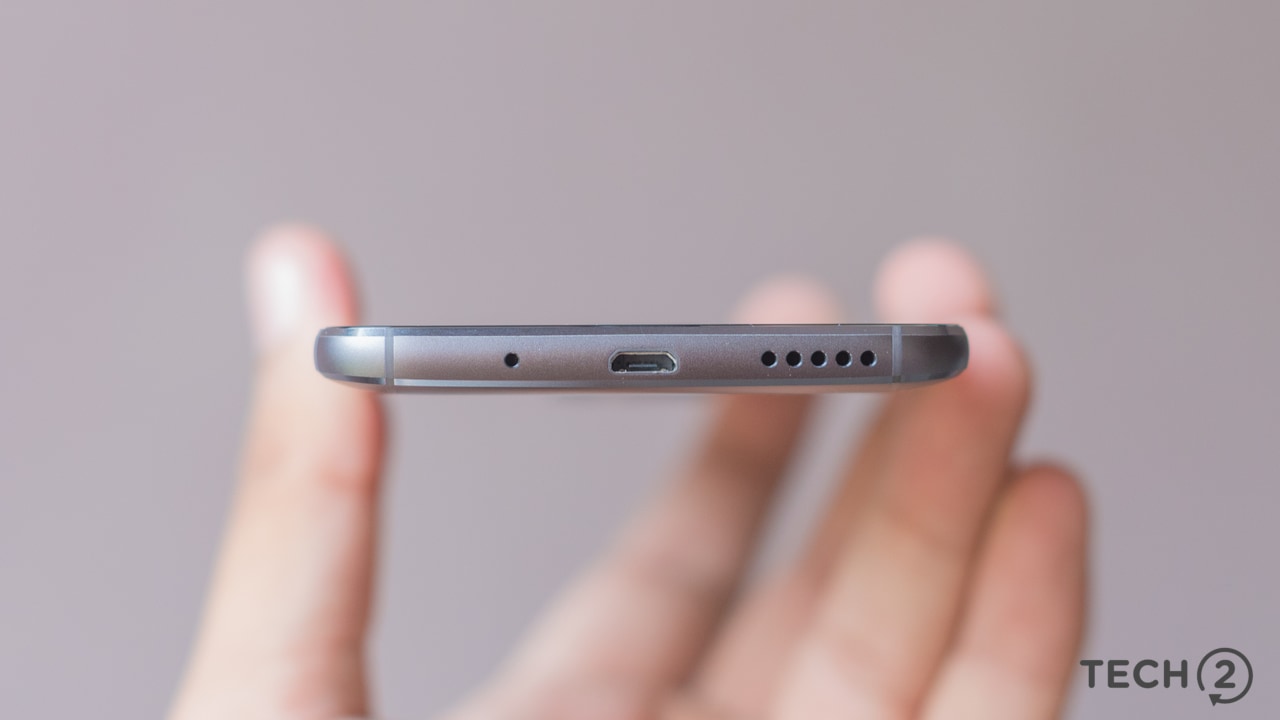 The company has changed a significant number of things in terms of the design to ensure that it looks like a new, streamlined and evolutionary design. Little details with antenna bands neatly running along the borders to integrate with the design and polished metal finish make a huge difference.

G5S Plus device is powered by an Octa-core Qualcomm Snapdragon 625 clocked at 2.0 GHz along with an Adreno 506 GPU. It comes with 4 GB RAM and 64 GB internal storage and an option to expand the storage using an external microSD card up to 128 GB. The device is packed with features.

G5S Plus packs a 5.5-inch full HD display with an effective resolution of 1080x1920. The main reason which makes the G5S Plus special is the dual camera on the back at this price point. The dual camera unit on the back of the device

The new Moto G5S Plus will feature a 5.5-inch full HD (1080x1920 pixels) IPS LCD display panel with a protection of Corning Gorilla Glass 3. The LCD panel comes with a 401 ppi pixel density and a 70.1 percent screen-to-body ratio. These things remain largely unchanged when compared to previous Moto G devices or the Moto devices launched earlier this year. The display looks bright and vibrant with good viewing angles. However, brightness level does take a hit when viewed from an angle.

The volume and power buttons are on the left

As mentioned earlier, the G5S Plus comes with an Octa-core Qualcomm Snapdragon 625 processor clocked up to 2.0 GHz. It is coupled with the Adreno 506 GPU to handle any graphically-intensive tasks on the smartphone. The RAM has been upped by 1 GB compared to last year and the internal storage has been doubled.

The Moto G5S Plus comes with Android Nougat 7.1.1 out of the box along with the June Android security patch. This is one of the few smartphones that is running Android Nougat 7.1.1, which is good, because few companies are supporting the update. Motorola has not announced any date for Android Oreo 8.0 update, but considering that the device is running stock Android, I won’t be surprised if Motorola is the first to roll out the Oreo update after Google. Moto G5S Plus packs a stock Android with minimal bloatware. 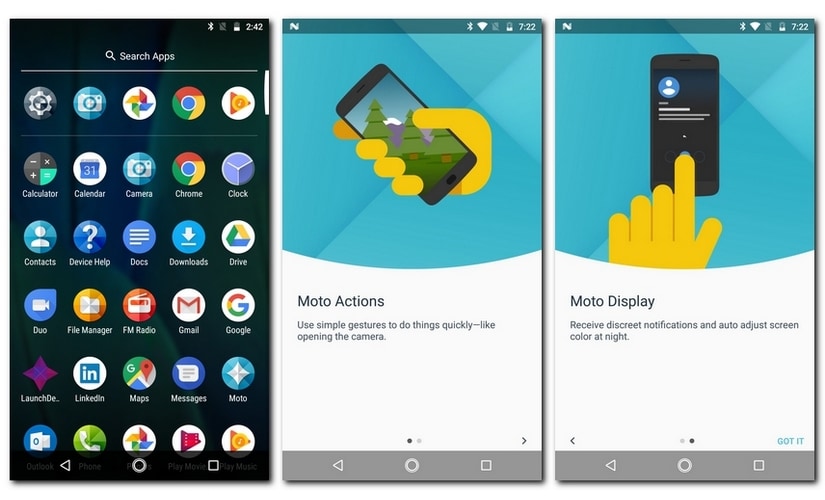 Bloatware in the OS is minimal. You get stock Android with 'Moto' Device Help' and 'Files' apps as well as the standard Google apps. The LinkedIn and Outlook apps are the only real 'bloatware' on the device. Users can now use the ‘Moto’ app to access the ‘Moto Actions’, ‘Moto Display’, and ‘Moto Voice’ features that are part of the Motorola device experience. Each adds additional functionality to the stock Android experience to improve overall usability, I feel.

Last but not the least, Motorola has added the Google Assistant nav bar animation that we've only seen on the Pixel so far. 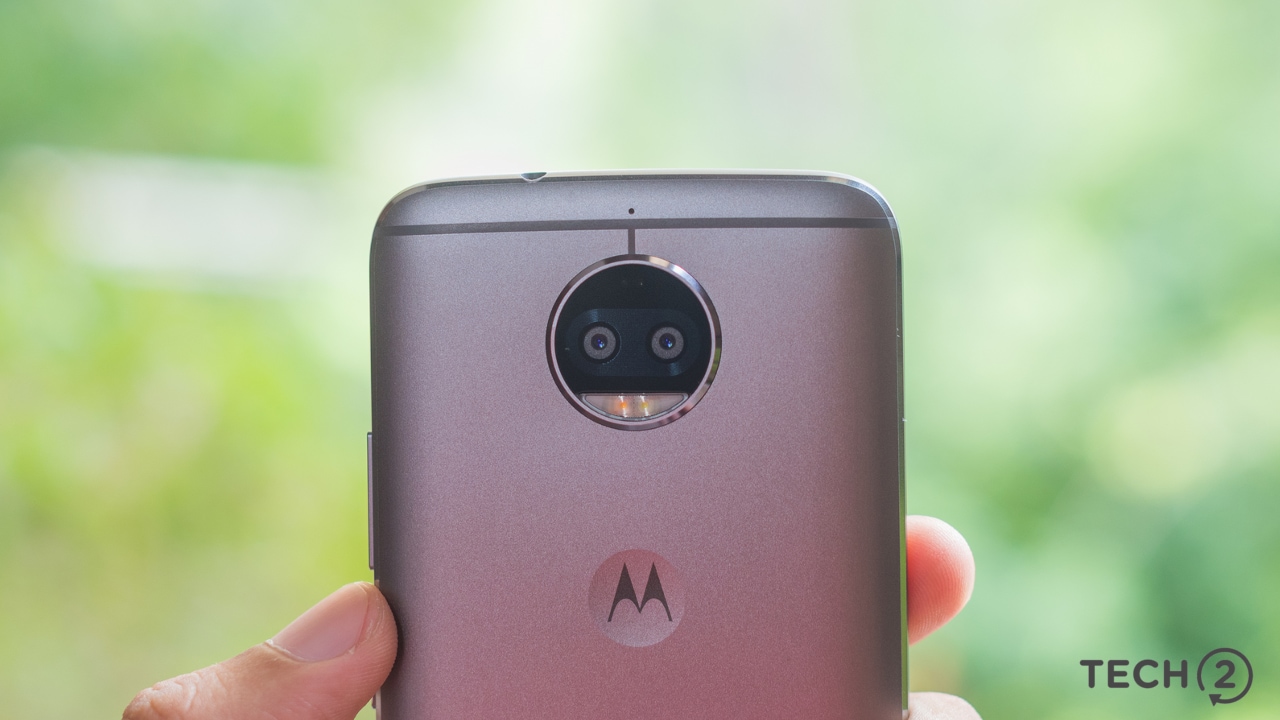 The dual-camera setup on the Moto G5s Plus

The Motorola Moto G5S Plus sports a dual 13 MP camera setup on the back with an f/2.0 aperture, colour balancing dual-LED flash and depth editing software, along with an 8 MP camera module with a wide-angle lens, f/2.0 aperture and LED flash. One 13 MP camera sensor shoots in colour while the other one shoots in monochrome for better image quality in low light conditions. Users will be able to shoot 4K video at 30 fps. 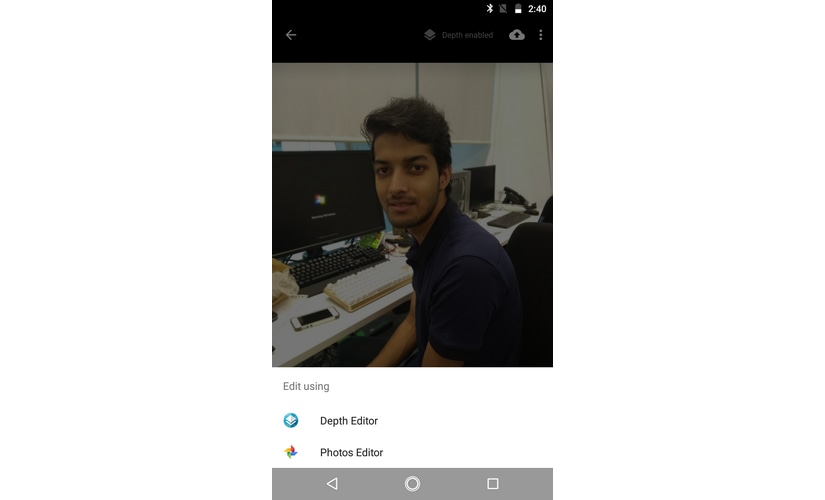 Depth Editor after clicking a picture in the 'Depth' mode.

The company has added a dedicated 3D depth sensor to capture depth data so that users can edit the depth of the pictures after the picture is shot. They can also apply actions like ‘Selective B&W’, ’Selective Focus’, or even ‘Replace background’ in the ‘Depth Editor' app. However, one thing that bugged me was the comparatively longer waiting times that G5S Plus took while saving images.

The smartphone comes with support for microUSB 2.0, GPS, Wi-Fi 802.11 a/b/g/n, Bluetooth v4.2, a 3.5 mm headphone jack and dual nano-SIM slots in terms of connectivity options. The device also packs a fingerprint scanner on the front along with accelerometer, gyroscope, ambient light and proximity sensors to expand the functionalities of the device.

Users will get a 3,000 mAh non-removable Lithium-Ion battery along with a 15 W Turbo-Charger inside the box.

Motorola has announced a compelling device in terms of the build quality while improving on the design to improve usability. While the dual camera setup did not impress me much in my limited time with the device, the unibody metal finish of the device made up for the ordinary camera experience. Motorola is sticking to the winning formula that has worked for the company so far. Stock Android, solid build quality and evolutionary upgrades in terms of hardware. The company also slashed the price of Moto G5 Plus down to Rs 14,999 to make it easier for users to decide between the G5 Plus and the G5S Plus.

However, we still have to test the smartphone and put it through its paces to check if the latest flagship from Motorola is worth your hard-earned money or not.