A week ago, dozens of tech companies, including Apple, Google, Microsoft, Facebook Inc, and others, formed The Coalition for the American Dream.

Alphabet Inc’s Google and Facebook Inc on Wednesday joined a legal challenge by more than 100 tech companies against a decision to end protection for so-called ‘Dreamer’ immigrants, the companies told Reuters. 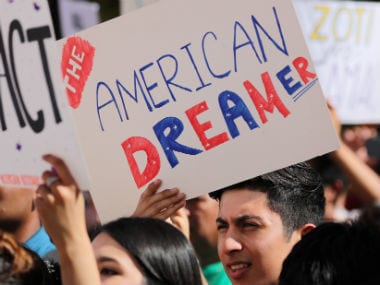 A legal briefing was filed Wednesday afternoon on the Deferred Action for Childhood Arrivals (DACA) program, which protects immigrants brought into the United States illegally as children from deportation and which the Trump administration has decided to scrap.

Tech firms argue that such immigrants are vital to the US economy and that ending the program will hit growth.

The filing is in support of a lawsuit filed by California Attorney General Xavier Becerra in the Northern District of California, according to the filing.

Becerra filed an additional motion on Wednesday that seeks to put a block on the withdrawal of DACA. That was supported by iPhone maker Apple Inc.

“Apple will be harmed significantly if it can no longer benefit from the hard work, creativity, and intelligence of its employees with DACA status,” said Deirdre O‘Brien, Apple’s vice president of people, in a filing supporting the motion. Apple employs more than 250 DACA recipients, the filing said.

The lawsuit challenges Trump’s September decision to rescind DACA, which was established by former President Barack Obama in 2012. It is set to expire in March.

“DACA’s rescission will inflict serious harm on US companies, all workers, and the American economy as a whole,” the filing reads, according to a draft of the amicus brief provided by one of the companies.

A week ago, dozens of tech companies, including Apple, Google, Microsoft, Facebook Inc, Amazon.com Inc and others, formed The Coalition for the American Dream, a group calling for bipartisan legislation this year that would give illegal immigrants a path to permanent residency. Reuters was first to report that the coalition was being formed.

About 900,000 immigrants have been shielded from deportation since the DACA program began.