The upcoming Windows 11 Start Menu might include quick shut down and restarts, dark-mode view, pinned apps, and recent files.

Microsoft’s upcoming Windows 11 OS operating system leaked on Thursday,  17 June. The leak shows the complete user interface among other things. The look was first seen in screenshots that were published at the Chinese site Baidu. The interface and start menu of Windows 11 are similar to their original version in Windows 10X. The start menu is a simplified version of Windows 10, without Live Tiles. It includes quick shut down and restarts, dark-mode view, pinned apps, and recent files. The app icons are placed along the taskbar, the tray area has been cleared up and a new start button has been added in the current version. 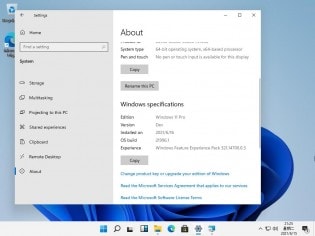 Windows 11 also has rounded corners which can be seen in context menus, and around apps and the File Explorer. Microsoft may also bring back Windows Widgets as shown in its early version to provide quick access to news, weather, and more. There's also a sound in the new OS that triggers with every boot. The upcoming offering has new snap controls to allow access from the maximise button on all apps as modern-day equivalents of the veteran cascade windows operating system function. You can close windows side by side, or arrange them section-wise on your desktop.

Microsoft is reportedly renovating its Windows App Store to allow developers to submit any Windows application, including browsers like Chrome, Firefox, or even third-party commerce platforms in apps to avoid the slash it takes from in-app buying systems.

The tech biggie has reportedly been working on a new app store for Windows recently, suggesting a big shift from the currently existing setup. CEO Satya Nadella has promised to “unlock greater economic opportunity for developers and creators” with Windows in a new store.

The new operating system is still in progress and there has been no word from Microsoft to clarify the information in the leak.

The company will hold a special Windows event to unveil its next OS on June 24. The event will start at 11 AM ET. The event invite includes a window creating a shadow with a seeming number 11 outline.

This is just the Start. Tune in on June 24th at 11 am ET to see what's next. #MicrosoftEvent https://t.co/DM7SYVdc3j

The company has also teased a “next generation of Windows” announcement for months, and the current leak now confirms that Windows 11 will be officially unveiled later this month.