The only thing I love about the Go 2 is its design — and the keyboard — both of which are engineering marvels in their own right.

I don’t get it. Why would anyone want to spend Rs 70,000+ on a laptop/tablet hybrid with no power to speak of, an unintuitive touch UI, and tolerable battery life?

I don’t know, maybe you really love Windows 10 and have an irrational dislike for everything Apple/Android? Whatever the case, I ask again, why?

In the one week I’ve spent with the device, there wasn’t one moment, not one, where everything just clicked and I thought to myself, “Yeah, I could see myself getting one of these.” 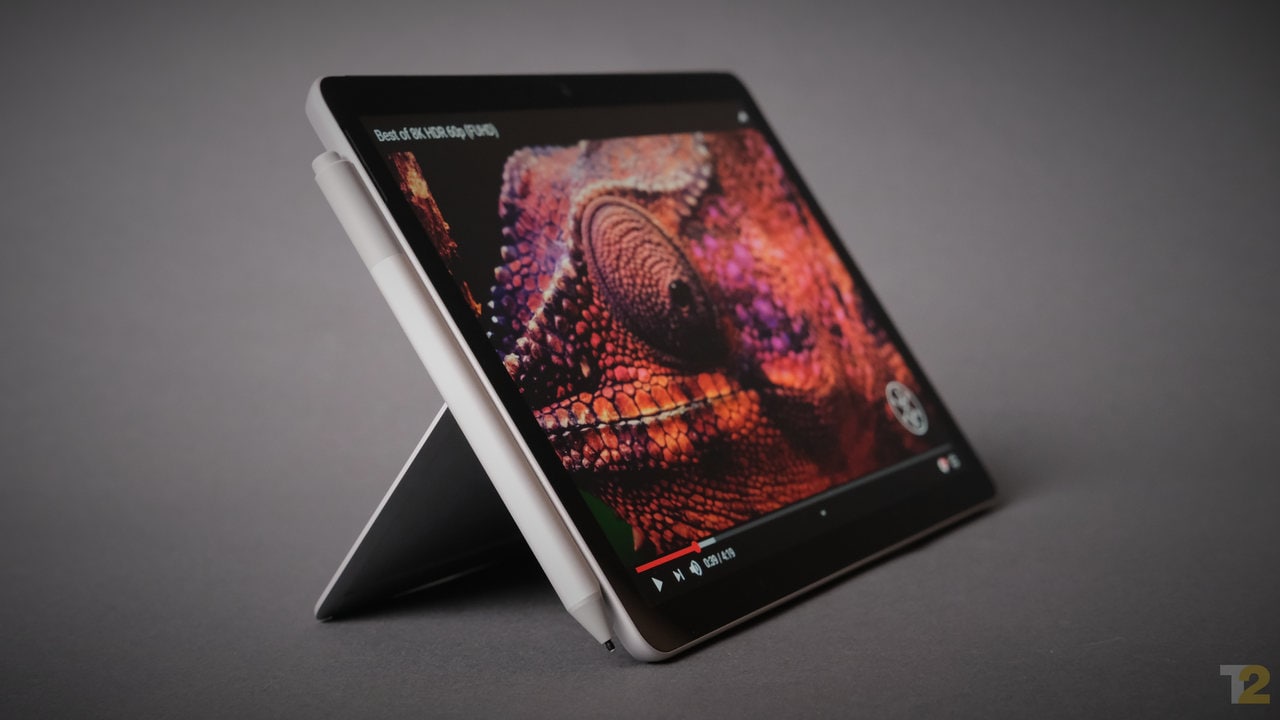 The Microsoft Surface Go 2 is a low-power, Windows 10-based tablet. You get an option of either an Intel Pentium Gold or Intel Core M3 for the CPU. Image: Anirudh Regidi

The Surface Go 2 is a Windows 10-based tablet that’s powered by an 8th Gen Intel Core M3 CPU, 8 GB of RAM, and includes up to 128 GB of SSD storage. The display is a 10.5-inch 1920x1280 touch screen — in what is an admittedly comfortable 3:2 aspect ratio. You get Windows Hello face recognition, a single USB Type-C port, Microsoft’s pointless Surface Connect Port, a microSDXC card reader — because we live in a world where that’s still a thing /s — and a nano SIM tray that lets you utilise the integrated Qualcomm x16 4G LTE modem.

If you’re feeling particularly masochistic, you could opt for the cheaper, Intel Pentium Gold-powered Surface Go 2 with 4 GB of RAM and 64 GB of eMMC storage — eMMC is so slow that even self-respecting smartphone makers avoid it.

At a time when Apple is offering an M1 SoC — with an 8-core CPU, 16-core neural engine, and an 8-core GPU — that’s putting all high-end Ultrabooks and many low-end gaming laptops to shame, powering the Surface Go 2 is a wimpy little dual-core Intel CPU with, I believe, one of the slowest GPUs money can buy.

The Core M3 CPU is powerful enough to handle Windows, Microsoft apps — Word, Powerpoint, Excel — and perhaps half a dozen browser tabs. You can also, in a pinch, indulge in some light editing work in Photoshop or Lightroom, but only as long as you’re not working with large files and/or intensive effects and filters. Even in dedicated apps, the stylus is clunky to use and isn’t as well integrated as the Pencil is with iPadOS. Image: Anirudh Regidi

Everything is so slow that you can almost see the wheels spinning and gears clicking into place as you move windows about or simply open the notification centre. Hell, you can count every frame when maximising and minimising app windows or when the Start menu opens up.

Video editing is completely out of the question, and gaming is possible if all you want to do is play Microsoft’s ad-supported Minesweeper and Solitaire. 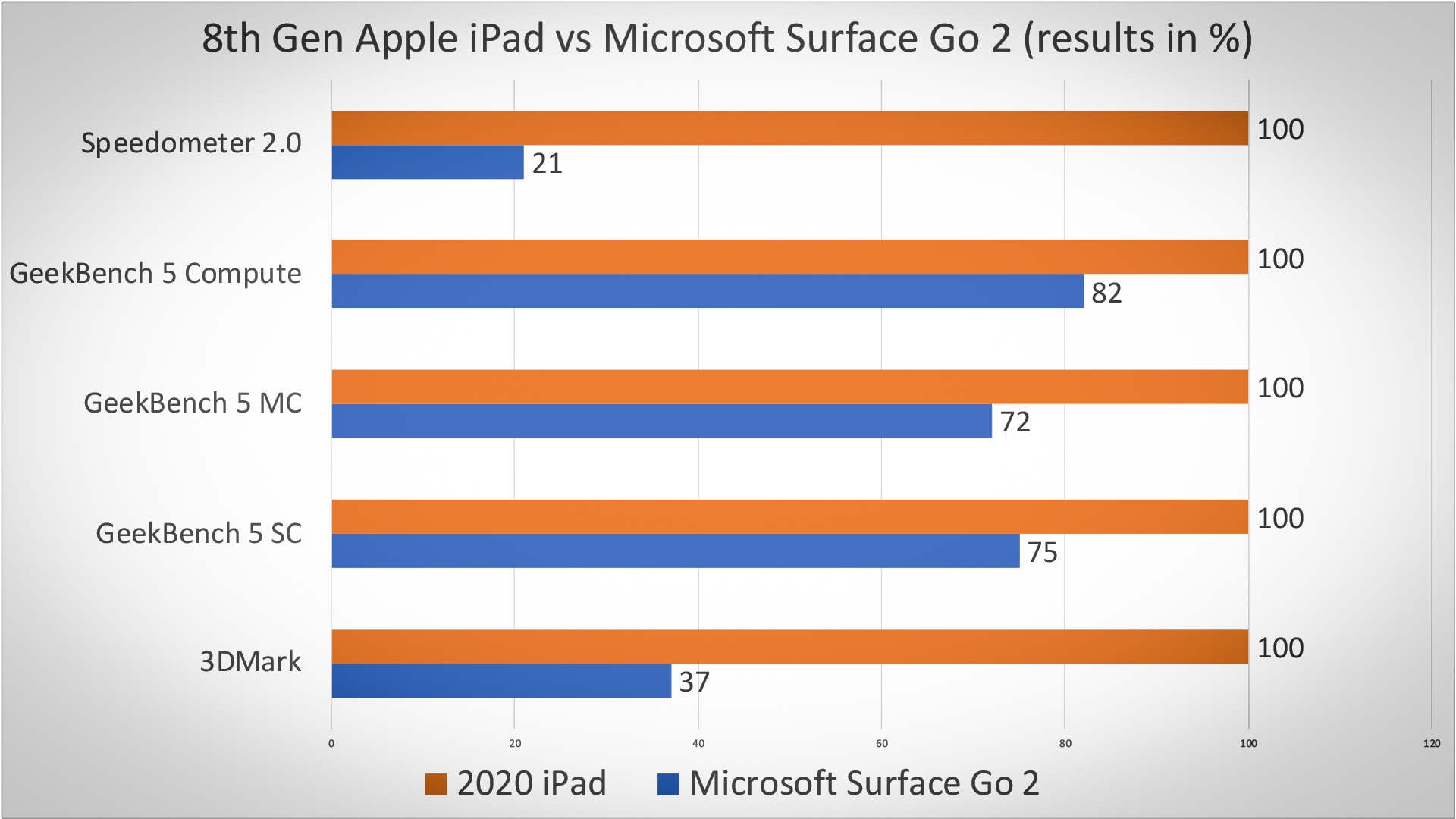 The Surface Go 2 can’t even hold its own against an iPad with a chip from three years ago. And that’s as much Intel’s fault as it is Microsoft’s.

The screen is actually quite nice. It’s a bright 270 nits and covers 91% of the sRGB spectrum, it’s also very sharp and perfect for reading and writing. The speakers are completely lacking in the bass department, but they are quite loud. In fact, the Go 2 isn’t actually too bad as a content consumption device.

That being said, if you use the device in portrait mode, you know, to read stuff, not only will you have to deal with a juddery frame-rate, but you’ll also have to tolerate a weird jello effect where one side of the screen responds faster than the other, resulting in the entire display looking like it’s wobbling.

Do I have to talk about that UI?

Windows 10 offers, unequivocally, the worst touchscreen experience you could find on a tablet today, primarily because there aren’t any apps, but also because the UI in general hasn’t yet been optimised for touchscreen use.

I’ll give you some examples:

This UI is a ghastly, unintuitive, inconsistent mess that only makes sense when you’re using a keyboard and mouse.

Again, I just don’t get it. Why would anyone want this device?

The 2020 iPad (Review), the cheap one, the one that costs Rs 28,000, which also happens to run on a 3-generations-old Apple SoC, offers a browser that’s five times as fast as the one on the fully specced-out Go 2, supports most Microsoft apps, is easily two to three times more powerful, has a tonne of apps, supports modern 3D games, has a better display, is slimmer and lighter, doesn’t get as hot, lasts twice as long, edits 4K videos… I could go on for ages. And I haven’t even mentioned how much more sensible and usable iPadOS is when compared to Windows 10 in tablet mode or that the stylus is very intuitive to use. Aesthetically, the Microsoft Surface Go 2 is a gorgeous device. It’s too bad that the software and internals aren’t up to scratch. Image: Anirudh Regidi

The only thing I love about the Go 2 is its design — and the keyboard — both of which are engineering marvels in their own right, and I do wish Apple or Google would simply steal the design for their future tablets.

But that really is all there is to like about the Go 2. Performance is nowhere near adequate, and that UI needs a lot of work. Maybe Intel’s upcoming Lakefield chips can provide that much-needed performance boost, and maybe Microsoft will one day decide to actually optimise the Windows UI for tablets.

In any case, I just don’t see the point of this device at this time.