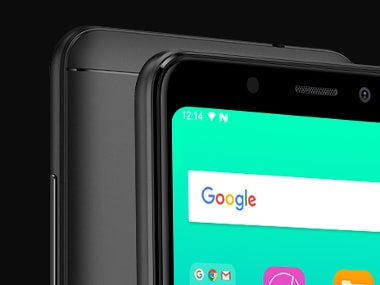 Sharma promised that the device will be “highly disruptive” and that it would unleash a “storm”. He explains that the company’s reticence these past couple of quarters is because it’s been working on creating a device that is truly disruptive. They’ve been biding their time and have used that period to build up infrastructure and develop a better device.

The result of all that effort, in part, is the Micromax Canvas Infinity. The USP of the device is its 18:9 display, which measures 5.77-inches across. Pointing out that a Samsung Galaxy S8 has a screen to body ratio of 84.2 percent, Sharma says that the Infinity is offering a ratio of 83 percent.

The device itself is powered by a Snapdragon 425 processor and includes 3 GB of RAM and 32 GB of storage. The storage is expandable up to 128 GB via a microSD slot. This is a dual-SIM device.

The front camera on the device is a 16 MP unit with support for “real-time bokeh”, says Sharma. This isn’t a dual-camera unit so the bokeh effect must be entirely software based. The rear camera is a 13 MP f/2.0 unit with a feature that Micromax is calling ‘Super Pixel’. Essentially, the camera will take multiple pictures and stitch them together to create an image of higher quality.

The battery is a 2,900 mAh unit. A finger print sensor is included.

On paper, these specifications are decent and don’t promise something disruptive. However, it’s the price that is the highlight of the phone. At Rs 9,999, the Micromax Canvas Infinity is the cheapest device in the market with an 18:9 display.

The device will run Android 7 Nougat at launch and will get the update to Android 8.0 Oreo as soon as it is available, says Sharma.

The Snapdragon 425 is a low-power processor and is outclassed by the one in the similarly priced Xiaomi Redmi Note 4.

Device registrations will start today and will be available from 1 September as an Amazon exclusive. The phone will later be available in retail stores around the country.

Micromax is also promising 24-hour ‘repair or replace’ service via its network of express service centres around the country.

Micromax to launch Evok Dual Note, a dual camera smartphone on 22 August; to be a Flipkart exclusive

Micromax Canvas Infinity series with 18:9 ratio display could be unveiled on 22 August