Mercedes-Benz EQS electric sedan makes global debut, has a range of up to 770 kilometres

Envisioned as an all-electric version of the S-Class, the Mercedes-Benz EQS is expected to be launched in India in 2021.

The Mercedes-Benz EQS electric sedan made its world premiere late Thursday, marking the global debut for what is a key addition to the German carmaker’s fast-growing electric vehicle portfolio. Based on the company’s Electric Vehicle Architecture (EVA), the Mercedes-Benz EQS is the brand’s first model to utilise a dedicated battery EV platform, and as such, is envisioned as an all-electric version of the flagship Mercedes-Benz S-Class sedan. To that end, both are made at the same ‘Factory 56’ in Sindelfingen, which Mercedes says is its most advanced plant till date. 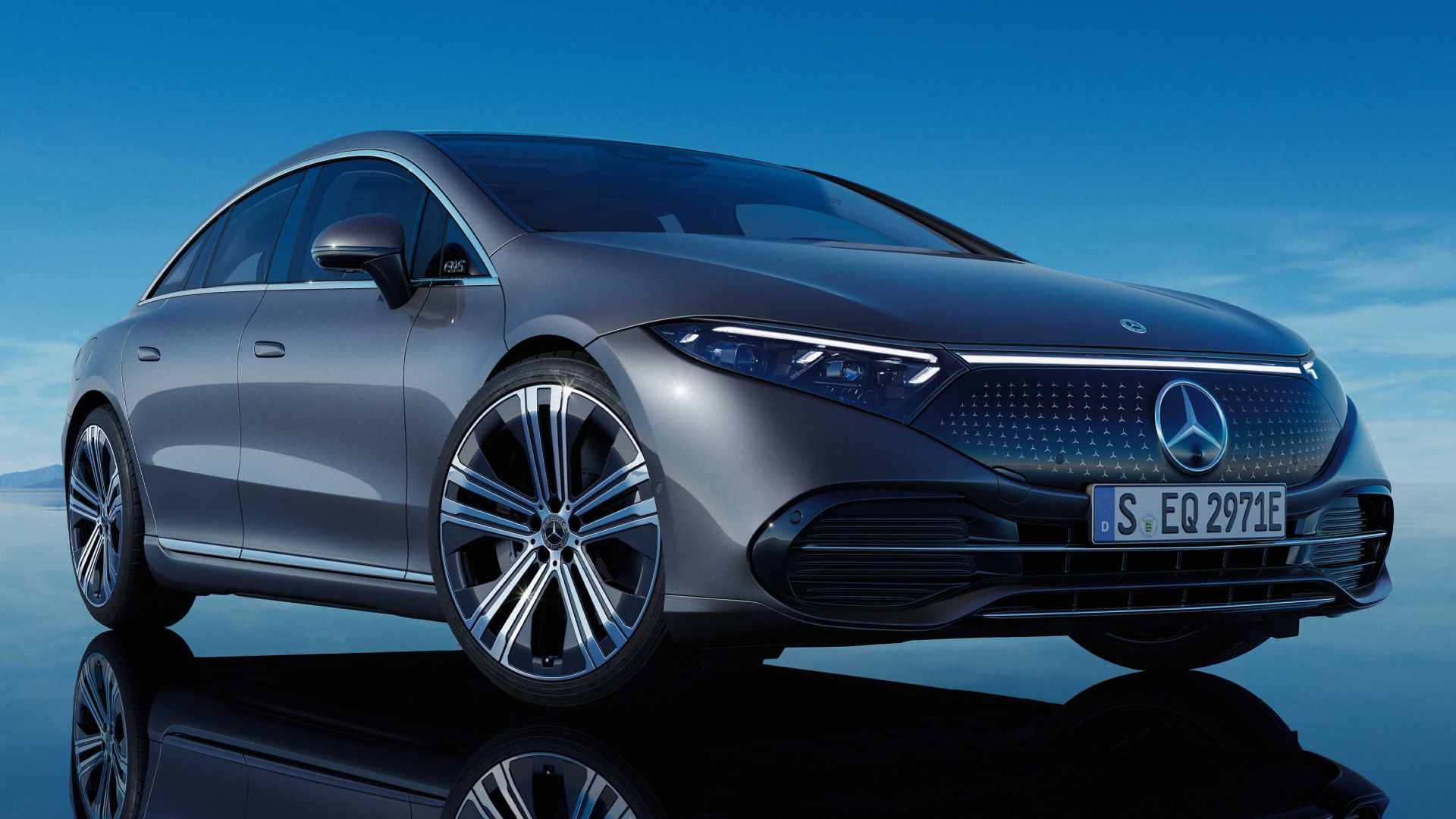 The Mercedes-Benz EQS is the brand's first model to be based on a dedicated BEV platform. Image: Mercedes-Benz

At 5,216 millimetres in length, the EQS is a little bit longer than the standard S-Class, but what’s worth noting is that its 3,210-millimetre wheelbase is almost the same as that of the long-wheelbase S-Class. Another highlight of the EQS is Mercedes’ claim that it is – despite being a fairly large vehicle – the most aerodynamically efficient production car in the world, with a drag coefficient of just 0.20, bettering even the facelifted Tesla Model S. In terms of design and styling, the production-spec EQS retains quite a lot of the Vision EQS’ cues, as well as its swoopy silhouette and tipped-forward stance. The LED headlights are linked by a slim light bar, and there’s a sealed radiator grille area featuring a gloss black finish, with a three-dimensional star pattern available as an option. The clamshell bonnet is fixed, so there’s no ‘frunk’ with the EQS.
Along the sides, the sharply rising beltline and window line catch attention, along with the large alloy wheels (options ranging from 19- to 22-inches will be available), flush-fitting door handles and a sharply raked roof, which flows into the stubby tail section. The intricate pattern of the LED tail-lights is pretty cool, too. The Mercedes-Benz EQS’ interior features a first for the brand – the MBUX Hyperscreen, which brings a total of three displays installed underneath a curved glass panel that spans the entire width of the dashboard. There are no physical switches or controls on the dash, and the latest-gen MBUX infotainment is capable of receiving over-the-air updates, which Mercedes will also use to roll out functional upgrades, including the ability to unlock full rear-wheel steering angle (up to 10 degrees), service subscriptions and even ‘free software test phases’. 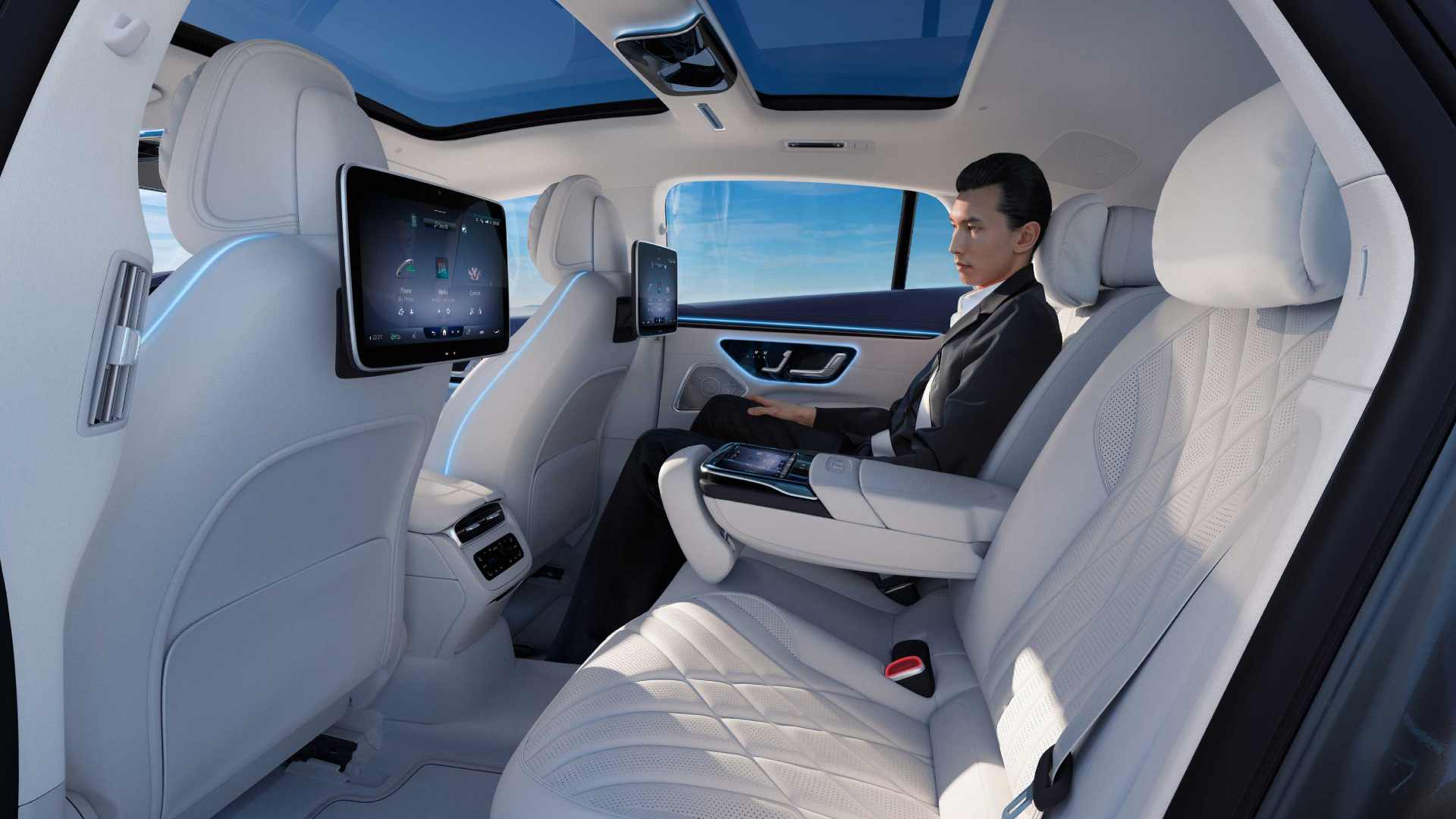 Additionally, thanks to the flat floor, the EQS is said to have even more space for rear-seat passengers, with the twin-sunroof setup helping create a sense of airiness in the cabin. What’s more, the EQS’ 610-litre boot is also bigger than that of the S-Class (550 litres).

The 580 has 4MATIC all-wheel-drive and torque vectoring, has a total output of 523 hp and 855 Nm of torque and a 0-100 kph time of 4.3 seconds. Both variants are limited to a top speed of 210 kph. A version with a smaller battery is expected to follow later this year, along with an AMG version producing over 700 hp.

On a full charge, the Mercedes-Benz EQS has a range of 770 kilometres (WLTP cycle). With DC fast charging at up to 200 kW, Mercedes-Benz says the EQS can regain about 300 kilometres of range in a mere 15 minutes. At home or at public charging stations, the EQS can be charged at up to 22 kW (AC) using the on-board charger. In Japan, bidirectional charging with the EQS will also be possible.

Mercedes-Benz introduced India to the EQ brand last year, by launching the all-electric EQC SUV in our market. The Mercedes-Benz EQS is expected to be part of the 15 launches the company has lined up for India, and is likely to arrive on our shores later this year. But it certainly won’t come cheap – expect Mercedes-Benz EQS prices in India to be closer to the Rs 2 crore mark (ex-showroom).

Auto Expo 2018: Here are the most anticipated cars from the 14th edition of the motor show

Auto Expo: For Mercedes, the game changers are compact luxury cars in India