NASA has released a stunning picture of dunes on the surface of Mars with snow and ice on ridges. It was spring in the Northern hemisphere when this image was taken by the High Resolution Imaging Science Experiment (HiRISE) camera on Mars Reconnaissance Orbiter, NASA said. 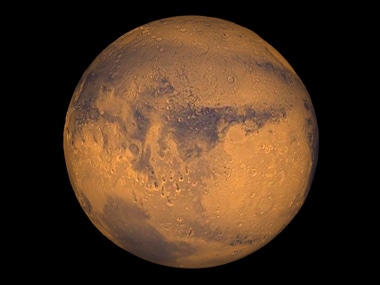 Over the winter, snow and ice inexorably covered the dunes. But unlike on Earth, this snow and ice is carbon dioxide, better known to us as dry ice. When the sun starts shining on it in the spring, the ice on the smooth surface of the dune cracks and escaping gas carries dark sand out from the dune below, often creating beautiful patterns.

On the rough surface between the dunes, frost is trapped behind small sheltered ridges. The image was captured in May and NASA released it on 24 August.

Just recently on 24 August a NASA announced a rocket mission to study disturbances in the upper atmosphere that interfere with communication and technology systems. The launch will form night-time, white, artificial clouds during two flights between August 29 and September 9. Snowy Dunes captured on the surface of Mars. NASA

The artificial clouds will be visible for residents of the Republic of the Marshall Islands, NASA said. The Waves and Instabilities from a Neutral Dynamo, or WINDY, mission will study a phenomenon that occurs in the ionosphere a layer of charged particles in the upper atmosphere.