Nasa's Curiosity rover, scheduled to take its maiden test drive on the surface of Mars, today reported its first setback when a sensor on its weather station was damaged.

Nasa's Curiosity rover, scheduled to take its maiden test drive on the surface of Mars, today reported its first setback when a sensor on its weather station was damaged.

However, the mission team says this is not a major problem and will merely degrade some measurements, not prevent them entirely.

It is not certain how the damage occurred but engineers suspect surface stones thrown up during Curiosity's rocket-powered landing may have struck sensor circuits and broken the wiring. Nasa is describing the news as an isolated "disappointment" in what has otherwise been a spectacular start to the mission.

Javier Gomez-Elvira, the principal investigator on the broken instrumentation - the Rover Environmental Monitoring Station (Rems) - said he was hopeful of finding a good way to get past the issue. 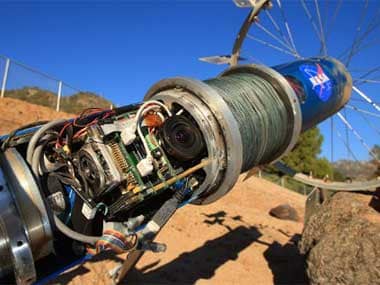 "We are working to recover as much functionality as possible," BBC Newsquoted Gomez-Elvira as saying.

Curiosity touched down in the equatorial Gale Crater two weeks ago. It will operate on Mars for at least two Earth years, looking for evidence that the planet may once have had the
conditions suitable to host microbial life.

Engineers are close to completing their programme of post-landing check-outs on Curiosity.

This has involved powering up all of the machine's instruments, and it was during this testing that the problem was found on Rems.

The weather station is a Spanish contribution to the rover project. It records air and ground temperature, air pressure and humidity, wind speed and direction, as well the amount ofultraviolet radiation falling on the surface.

These parameters are measured from sensors distributed around the rover, but a number are held on two finger-like mini-booms positioned halfway up the vehicle's camera mast. This is where the wind sensors are located.