The MarQ Turbostream is almost like a Google Chromecast and Amazon Fire TV Stick rolled into one.

These days, Google-certified Android TVs pretty much cover most media streaming requirements. But there are millions of households that still have a non-smart TV without any streaming capabilities built-in, or an early iteration of a smart TV that provides a sub-par streaming experience when it comes to popular OTT platforms like Netflix, Hotstar, Prime Video, etc. In such a scenario, a media streaming device can turn things around for the user without breaking the bank. 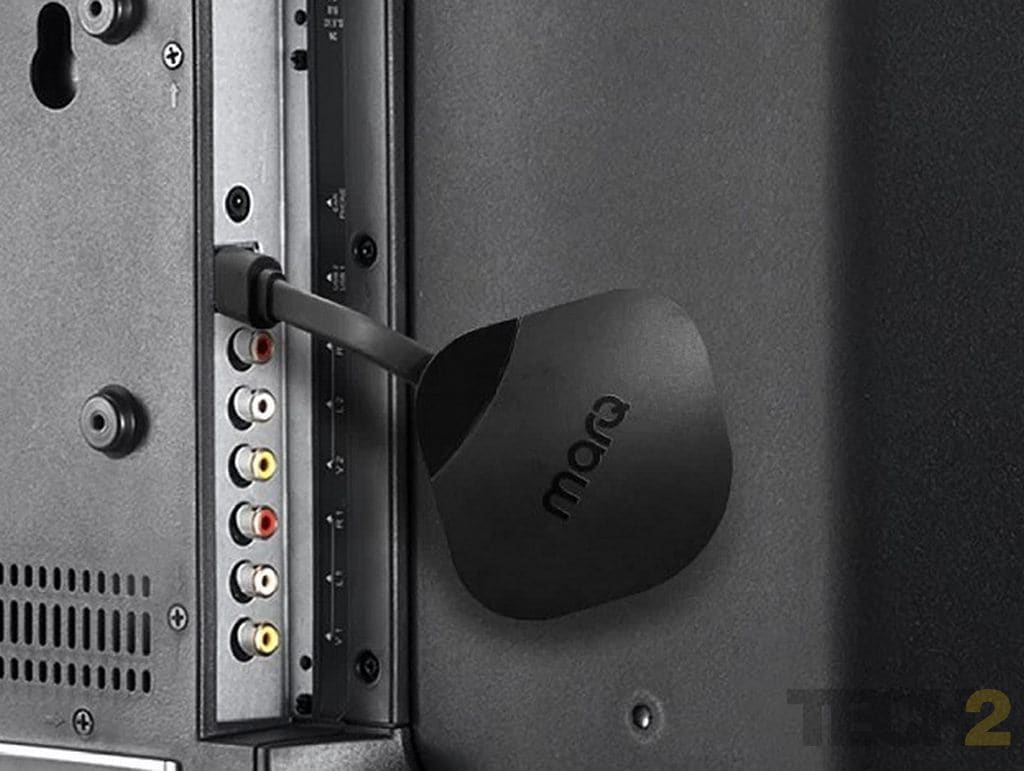 The MarQ Turbostream runs certified Android 9.0 for TV and comes preinstalled with a few basic Google services and apps for YouTube and Netflix.

Whenever one thinks of media streaming devices, there are only two primary options that come to mind — Google Chromecast or Amazon Fire TV Stick. Both devices have their pros and cons. While a Chromecast lets you cast videos from compatible apps (and there are tonnes of those) on your phone to the TV screen, it doesn’t let you install any apps on the device. So you need to have a phone or tablet with the particular app installed to do the needful. The Amazon Fire TV Stick is a better alternative that lets you install apps to the stick itself and comes with its own remote to browse and consume content. However, it doesn’t let you cast content from your phone or tablet. Yes, it lets you mirror content but that’s not the same as casting.

How is MarQ Turbostream different from Google Chromecast or Amazon Fire TV Stick?

MarQ Turbostream looks to offer the best of both worlds in a single device. It runs Android Pie (9.0) for TV and has a Chromecast built-in. What’s even better is it comes with Google Play Store preinstalled and lets you install apps on the device itself courtesy of 8GB internal storage. It also comes with a voice-enabled Bluetooth remote that lets you navigate the menus and content, control the playback and issue voice commands. So you don’t need to depend on another device to cast content to it. But of course, you can always cast content from your phone or tablet if you wish to if they are on the same WiFi network as the MarQ Turbostream. It gives you that flexibility, just in case.

At the heart of this product is a 64-bit quad-core processor clocked at 1.2 GHz and a Mali 450 GPU. They are accompanied by 1 GB RAM and 8 GB of internal storage, part of which is taken up by the OS and preinstalled apps. Speaking of OS, the MarQ Turbostream runs certified Android 9.0 for TV and comes preinstalled with a few basic Google services and apps for YouTube and Netflix. You get over the air software updates from time to time. The device supports dual-band Wi-Fi and Bluetooth 4.0.

You also get volume control, a mute button, home, back, power buttons, and hotkeys for YouTube and Netflix.

The Turbostream lets you play up to Full HD (1080p) content at 60 fps and supports Dolby Audio. This device does not stream at 4K resolution. The company bundles a Bluetooth remote with just the right amount of keys and it accepts voice inputs too after pressing the designated key. You have a direction pad that is used to navigate through the menus and content, as well as for control of media playback. You also get volume control, a mute button, home, back, power buttons, and hotkeys for YouTube and Netflix.

What I liked about MarQ Turbostream

The device is very easy to set up. All you need to do is plug it into one of the HDMI ports of your TV, connect the bundled charger, power it on, follow the onscreen instructions, and you are good to go. Two AAA batteries for the remote are also bundled in the package, along with an IR Blaster cable. You need to sync the remote with the Turbostream the first time by pressing a key combination shown on the screen. That went smoothly. A special mention must be made for the build quality of the remote, which is quite sturdy and well rounded without any rough edges.

You need to sync the remote with the Turbostream the first time by pressing a key combination shown on the screen.

As I mentioned earlier, it comes preloaded with Google Play Store and one can install apps for other streaming services like Hotstar, Sony LIV, Zee5, etc. The app for Prime Video is still not available for this device. Well, MarQ is a Flipkart brand and Prime Video is an Amazon service; do the math. Having said that, you can still cast content from the Prime Video app on your phone to the Turbostream seamlessly courtesy of the built-in Chromecast. That way, you do not miss out on any major platform here.

As long as you own a Full HD TV, you won’t complain about the picture quality. It is perfectly fine, and the same goes for the sound quality. You do not get as many options to tweak the audio and video quality on this device as on a Fire TV Stick. That’s not necessarily a bad thing as a majority of users don’t like to complicate things anyway. The interface is exactly the same as you get on certified Android TVs and it’s easy to use even for novice users.

It displays a row of shortcuts for installed apps — you can choose which shortcuts you want to see there, and in what sequence. Then you have rows displaying suggested or last seen content from specific services like Netflix or YouTube. It lets you edit that too. And that’s pretty much what users need to know. The learning curve is not at all steep.

What can improve further in this device

While there are no major flaws in the MarQ Turbostream, there are a few areas where it can improve further, starting with boot times. The device takes about 45 seconds to boot up. That’s on the slower side and I would like to see that go lower than 30 seconds. Some of the certified Android TVs these days boot in half a minute, despite the additional ports and device checks. So there is no reason for the Turbostream to not match that figure or do better.

Also, the voice commands experience feels a bit sluggish as there is a noticeable delay between you pressing the button on the remote and the device getting ready to accept the command. No such delay is observed when navigating through menus or apps. This issue, as well as the boot times, can be fixed with a software update. I hope to see that sooner rather than later.

The voice commands experience feels a bit sluggish as there is a noticeable delay between you pressing the button on the remote and the device getting ready to accept the command.

The Turbostream has a volume control of its own that is separate from that of the TV. This can be slightly disconcerting and will take a bit of getting used to. One workaround is to set the device volume to full and control playback volume using the TV remote.

And lastly, the lack of 4K video support. Given its price point, I can look past that in this device, but I hope Flipkart soon releases a 4K variant of the Turbostream, just like Fire TV Stick 4K. The amount of 4K content is growing steadily with Netflix, YouTube and Prime Video already having ample on offer. One wouldn’t want to miss out on that for long.

The MarQ Turbostream is available on Flipkart for Rs 3,499 with a one-year warranty. You can also buy it up to 20 percent lower during sales. This makes it about Rs 500 cheaper than its nearest competitor, the Amazon FireTV stick, and it’s at least as capable, if not more so.

As I said at the start, this device is a great mix of the two popular media streamers available in India and offers the best of both worlds. It is not perfect, yet none of its flaws can be termed as deal-breakers. If you own a non-smart TV or a not-so-smart smart TV, and would like to make it a lot smarter, the MarQ Turbostream is what you need to do just that.

Amazon offers free Fire TV Stick with Samsung TV: Here is how to claim the offer