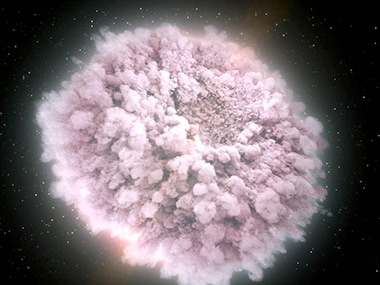 The two neutron stars that collided were the remnants of supernovas, the cores of long-dead stars. The event occurred in a galaxy designated as NGC 4993, in the constellation of Hydra, about 130 million light-years away. This was the closest gamma-ray burst with a known distance observed, and what makes the event unusual is that the burst was very faint. Apart from the gamma-ray burst, there was also a rarely seen flare up known as the kilonova.

The event left behind a debris field that researchers can comb through, informing scientists about the age of the universe, what kind of interactions are responsible for the forging of elements, and how matter behaves in extreme situations. This is the first time that scientists have observed light from an event that produced gravitational waves. Dozens of NASA's astronomical instruments observed the gamma-ray burst most likely to be tied to the event, as well as the aftermath of the collision, which either produced a very heavy neutron star or a very light black hole.

Paul Hertz, director of NASA’s Astrophysics Division says, "This is extremely exciting science. Now, for the first time, we've seen light and gravitational waves produced by the same event. The detection of a gravitational wave source’s light has revealed details of the event that cannot be determined from gravitational waves alone. The multiplier effect of study with many observatories is incredible."

The Swift, Hubble and Spitzer telescope started observing the kilonova to probe the composition of the debris field. The Swift mission found a rapidly fading source of ultraviolet light, which scientists had not expected. The light probably came from a short-lived debris disc that caused the short gamma-ray burst. The Chandra X-ray telescope scanned the source for X-rays, usually associated with short

The Chandra X-ray telescope scanned the source for X-rays, usually associated with short gamma-ray bursts. Again, the scientists were surprised as no X-rays were observed. The observatory detected X-rays nine days after the detection of the gravitational waves. The neutron stars emitted jets of material, and the X-rays were detected as the jets turned towards the Earth.

The Hubble Space Telescope observed the event in the infrared frequencies. There were no surprises here, and the infrared spectrum matched the expectations of the scientists. The observations from Hubble confirmed that the light sources were tied to the event detected by the gravitational waves, as the infrared signature matched the predictions of what the merger of two neutron stars would look like.

Spitzer trails behind the Earth and has the unique opportunity of continuing to observe the event after the sun moved too close to the NGC 4993 galaxy for other telescopes to observe the source. It was the last to join the party, but can inform scientists about the composition of the debris field. A collision of neutron stars is believed to lead to the formation of elements heavier than iron, such as silver, gold and platinum. More than 1,000 earth masses of gold and platinum are predicted to be produced by the event. The observations from Spitzer will reveal the quantities of heavy elements formed.