Military grade certification aside, the LG X4 Plus also packs in a Hi-Fi DAC (digital to analog converter) that allows for up to 32-bit 192 kHz audio output.

LG Electronics has launched a brand-new smartphone in its home market, South Korea. The electronics giant, launched a budget smartphone called the LG X4 Plus and it packs in military grade drop protection along with a focus on audio quality. 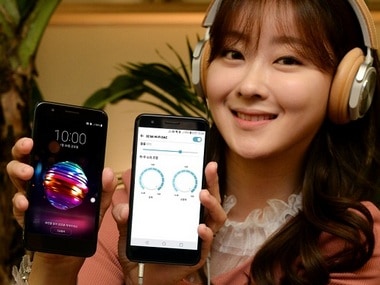 The LG X4 Plus. LG Social

The LG X4 Plus also brings LG Pay, a payment system that is currently only available in the Korea market.

The smartphones sports an aluminium construction with what appears to be plastic caps at the top and bottom and looks very similar to the Xiaomi Redmi 4. There is a fingerprint reader and it sits on the metal back. While it may look like your typical smartphone, the device sports a MIL-STD 810G rating, meaning it can withstand extreme temperatures, drops and whatever clumsy owners can throw at it with day to day usage.

However, this is more of entry-level to budget segment offering, meaning that it is priced a bit too high at $280, which also hints that it may never make it to India, considering what the competition offers.

Inside, sits a Qualcomm Snapdragon 425 paired with 2 GB RAM and 32 GB of internal storage, which can be expanded up to a generous 2 TB using a microSD card.

A 13 MP camera sits above the fingerprint reader on the back, while a 5 MP camera takes up selfie duties on the front above the display. The LG X4 Plus. LG Social

Powering all of the above is a 3,000 mAh battery, which seems more than sufficient when you take into consideration the chipset, display size and resolution.

Military grade certification aside, the LG X4 Plus also packs in a Hi-Fi DAC (digital to analog converter) that allows for up to 32-bit 192 kHz audio output. So the high price should at least appeal to buyers who are interested in better audio quality.