LG to announce a new W-series of smartphones in India on 26 June, could be called W10

The invite for the device shows that the LG W10 will come with a triple-camera array.

LG will be launching an all-new smartphone series in India called as the LG W-series on 26 June. The media invites for the event are now out and while the company has not revealed what the smartphone will be called, speculation is that the device could be named as the LG W10. 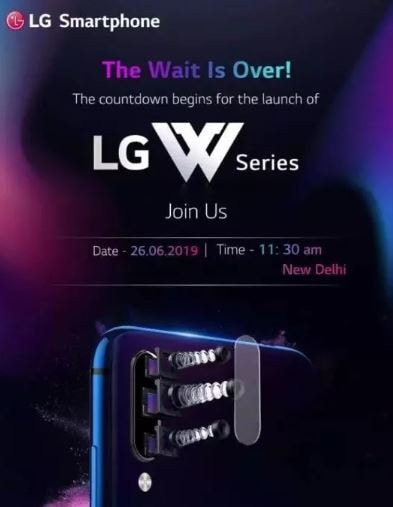 The invite for the device shows that the W10 will come with a triple-camera array, which has increasingly become very popular in mid-range and flagship smartphones. The third sensor, as expected happens to be an ultra-wide lens and it will be supported by a wide-angle and telephoto lens.

It is also being said that the notch on the device can be customised as per the user's need or can be removed entirely. We still need more clarity on what this actually means. The device will most likely be a budget device since an Helio P22 or a Snapdragon 439 is being touted to power the phone.

In terms of software, the device is said to come with Android 9.0 Pie out of the box and battery wise we expect the Lg W10 to have a 4,000 mAh battery. No more details of the device have been revealed as of now, but we should know in more detail on 26 June.