The rumoured specifications of Vivo Nex is quite similar to the Vivo Apex. It is rumoured to be around CNY 4,000 which is roughly Rs 42,000.

A leaked picture from Weibo shows a Vivo smartphone named the Vivo Nex and like the Vivo Apex concept smartphone it too features a notch-less and a bezel-less design. 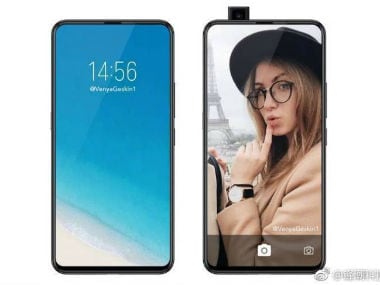 The caption of the picture says that phone might be a flagship phone of the company. The caption of the Weibo post also hints that the device could feature a rather high, 98 percent screen-to-body ratio as well. It is expected to come packed with a Qualcomm Snapdragon 845 SoC.

There are two leaked pictures and the second one hints that Vivo Apex may be the Vivo Nex. It also says that the phone might have a under display fingerprint reader with a pop-up selfie camera like the Vivo APEX, 8 GB RAM and a FunTouch OS 4.0 based on Android 8.1.

The rumoured specifications of Vivo Nex are quite similar to the Vivo Apex. Pricing is rumoured to be around CNY 4,000 which is roughly Rs 42,000.

Meanwhile, the Vivo Apex is expected to launch on 12 June in Shanghai, China. The release of the phone will be close to the heels of the FIFA World Cup which is set to take place in June in Russia. Therefore, the phone could be released ahead of the games. Vivo Apex was first revealed during the Mobile World Congress 2018 in Barcelona as a concept phone. Back then it featured an 18:9 FHD+ OLED display, a pop-up front-facing camera, and an under display fingerprint reader.