The Lava Z91 includes a feature that allows users to set shortcuts to open apps using the fingerprints of five fingers.

Indian smartphone manufacturer Lava has launched Z91, another smartphone in its Z series. The Lava Z91 is priced at Rs 9,999 and comes with a cashback offer of Rs 2,000 with Airtel. 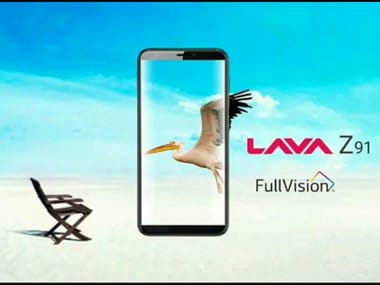 Lava Z91 features a 5.7-inch HD Plus Full View display with an 18:9 aspect ratio, is powered by MediaTek MTK6739 SoC and runs on 3 GB RAM. The fingerprint reader has been placed on the rear side of the device and comes with a feature that allows users to set shortcuts to open apps using the fingerprints of five fingers. Placing your index finger on the scanner will open a particular app, whereas putting the thumb on the sensor will open another app, depending on your customised setting.

The dual-SIM smartphone Lava Z91 also comes with facial recognition feature that can unlock the device by scanning the face of the user. The smartphone comes with a 3,000 mAh battery, Android 7.1 Nougat, skinned with Star OS 4.2. Other smartphones from Lava's Z series of includes the Z60, Z70, Z80, and Z90. The company is offering a two year of warranty and a one time screen replacement for free.

Lava and Airtel recently launched Android Go powered Z50 priced at Rs 2,400. The smartphone is originally priced at Rs 4,400 but the effective price of the smartphone comes to Rs 2,400 after a cashback offer of Rs 2,000 by Airtel.

The Lava Z50 features a 4.5-inch 2.5D Curved display with VGA resolution and Corning's Gorilla Glass for protection against scratches and screen damage. It comes with 8 GB of internal storage, 1 GB RAM and a 2,000 mAh battery. The memory can be expanded up to 64 GB with the help of an external microSD card.