In the latest leak, courtesy a Weibo user, one can see the Meizu M6 Note in all its glory. The leaked images show photos of the rear side of the device as well as the bottom edge. These leaks are in line with some of the speculation around the device. These include a dual rear camera setup and a quad LED flash unit. The bottom edge comprises a USB 2.0 connector in the centre, surrounded by a 3.5 mm headphone jack on the right-hand side and a speaker grille section on the left-hand side.

On 21 August, there was a leak showing a screenshot from the Geekbench benchmark. Uploaded on 17 August, the leaked benchmark hints at an octa-core Snapdragon 625 processor clocked at 2.0 GHz alongside 4 GB of RAM. The phone will be running on Android 7.1.2, according to the benchmarks.

This was different from the rumours which had suggested that the Meizu M6 Note could come with a MediaTek Helio P25 chipset. Maybe Meizu is planning to come out with two chipset variants of the phone. 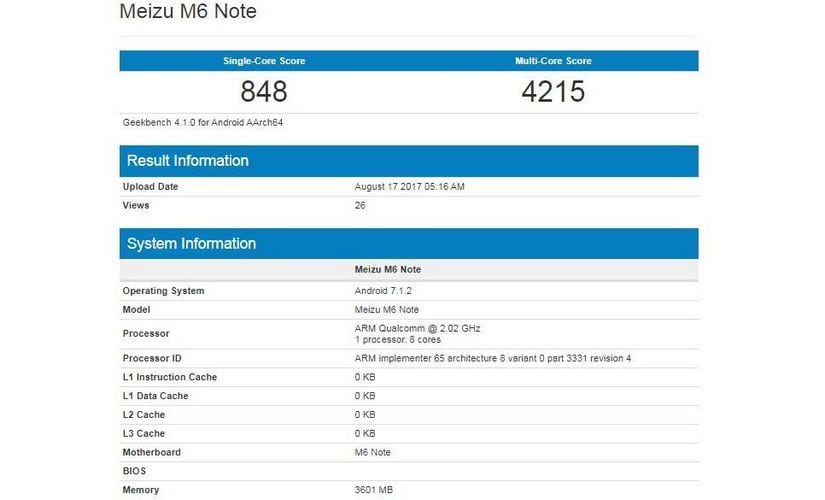 For a single-core test, the device managed to score 848 points and for a multi-core test it had a score of 4,215.

Other things that are known about the Meizu M6 Note include the presence of a 4,000 mAh battery and two RAM / storage configurations: 3 GB/32 GB and 4 GB/64 GB.

The price of the device hasn't yet leaked yet.