The Land Rover Explore smartphone will be available for orders beginning in April 2018 and will be priced at a range between 649 to 599 Euros.

Land Rover, a company better associated with building luxury SUVs, has decided to lend its name to a smartphone that will be called the Land Rover Explore. The company stated at an outdoor trade show in Munich that the smartphone will be debuted at MWC 2018 in Barcelona later this month. 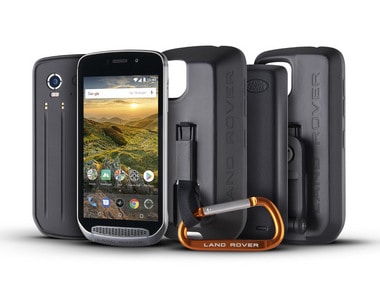 While the name sounds like another new SUV launched by the automobile company, the Land Rover Explore will be a ruggedised smartphone built by Bullitt Group.

According to a report by GSMArena, Bullitt has made rugged smartphones in the past for brands like Caterpillar and have the experience in building sturdy and durable smartphones.

What will make the Explore stand out though is that it will arrive with support for mods, similar to Motorola's approach with Moto Mods. The phone is said to feature a magnetic back to snap on the modules as and when required. While we do not know much about how many mods will be on offer, an Adventure Pack seems to be one of the available mods which will add a more capable GPS antenna, extra battery life and an AR viewfinder for navigating when offline. The Land Rover Explore will arrive with a magnetic back for mods. Image: GSMArena

The report states that the Explore will be targetted at a larger audience, including those who enjoy hiking and camping outdoors. The Explore is also expected to be less chunky in design when compared to other rugged smartphones made by Bullitt. The phone will be built by Bullitt, a company which has built rugged phones in the past.

Other specifications have not been announced by Land Rover yet but the phone will be available for orders beginning in April, at a price ranging between €649 to €599.

As per a report in 2016, Jaguar Land Rover had announced its partnership with Bullitt to make smartphones that embody the brand's style and appeal.

Copycat! JLR not amused as Chinese co does a 'knock-off' of Land Rover Evoque

Range Rover Velar along with 9 other vehicles coming to India this year: Jaguar Land Rover

JLR to assemble 2nd car in India; costs down by Rs 12 lakh