A set of spy photos have appeared on the internet before this, which partially shed light on how the SUV will look once it goes on sale.

Kia Motors India's next major launch for the Indian market will be the Kia Sonet sub-four-metre SUV that will be revealed on 7 August. A set of spy photos have appeared on the internet before this, which partially shed light on how the SUV will look once it goes on sale. The images how a mid-spec spec version of the Sonet, and confirm that many of the unique styling elements of the concept that debuted at the 2020 Auto Expo will be carried over, although in toned-down form. Most striking here is the full-width light bar that connects the two rectangular partially LED taillamps. The concave boot lid has been smoothened out a bit, and although the aggressively chunky skidplates remain, they have been given a flat look. The rear haunches are not as beefed up as in the concept, but the gloss black element in C-pillar has been carried forward.

At the front, although not visible here, we expect to see styling very similar to the concept. This means a rectangular headlamp cluster, the striking Tiger-Nose grille and wide airdams. 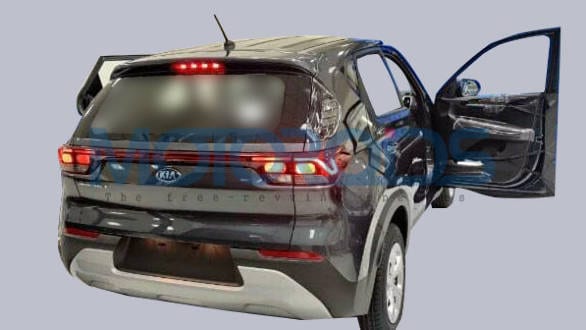 Based on the Hyundai Venue's running gear, we expect the Sonet to get the same engine and gearbox combinations. These will be the 1.0-litre turbo-petrol with the dual-clutch AT, the 1.2-litre petrol engine with a 5-speed manual and the 1.5-litre 100PS diesel engine with a 6-speed manual. The newly revealed iMT semi-automatic transmission from the Venue will be available with the Sonet too. Safety equipment like dual front airbags with ABS will be standard. We expect the Sonet to come with a few segment-first features, like a panoramic sunroof and 360-degree camera, to one-up the Venue.

Aside from the Venue, the Kia Sonet will rival the likes of the Maruti Suzuki Vitara Brezza, Hyundai Venue, Tata Nexon, Mahindra XUV300 and the Ford EcoSport. We expect prices to be very similar to that of the Venue, between Rs 6.5 lakh and Rs 11.5 lakh, ex-showroom.