A black hole from millions of light-years away can now be imaged, but women continue to be given less than their due.

"Woman Does 6% of the Work but Gets 100% of the Credit". That's one of the first videos that pop up when you search for MIT scientist Katie Bouman on YouTube. Another leading video is titled, "Hi my name is Katie Bouman and I’m a fraud." We can now capture on our screens a swirl of black nothingness trillions of kilometres away, but we still can’t manage to give a woman her due for the achievement.

Twenty-nine-year-old Katie Bouman led the creation of a new algorithm that produced the first-ever iconic image of a black hole released to the world last week. She was the leader of one of four teams that collaborated to turn massive amounts of data on half a ton of hard drives, culled from eight radio telescopes around the world, to produce that one image. But alongside this scientific breakthrough, another photo went viral on the Internet—this one capturing Bouman’s shy triumph of the moment when the black hole image was first processed on her computer screen—and she was heartily congratulated by her alma mater MIT, her peers and science enthusiasts all over the world. 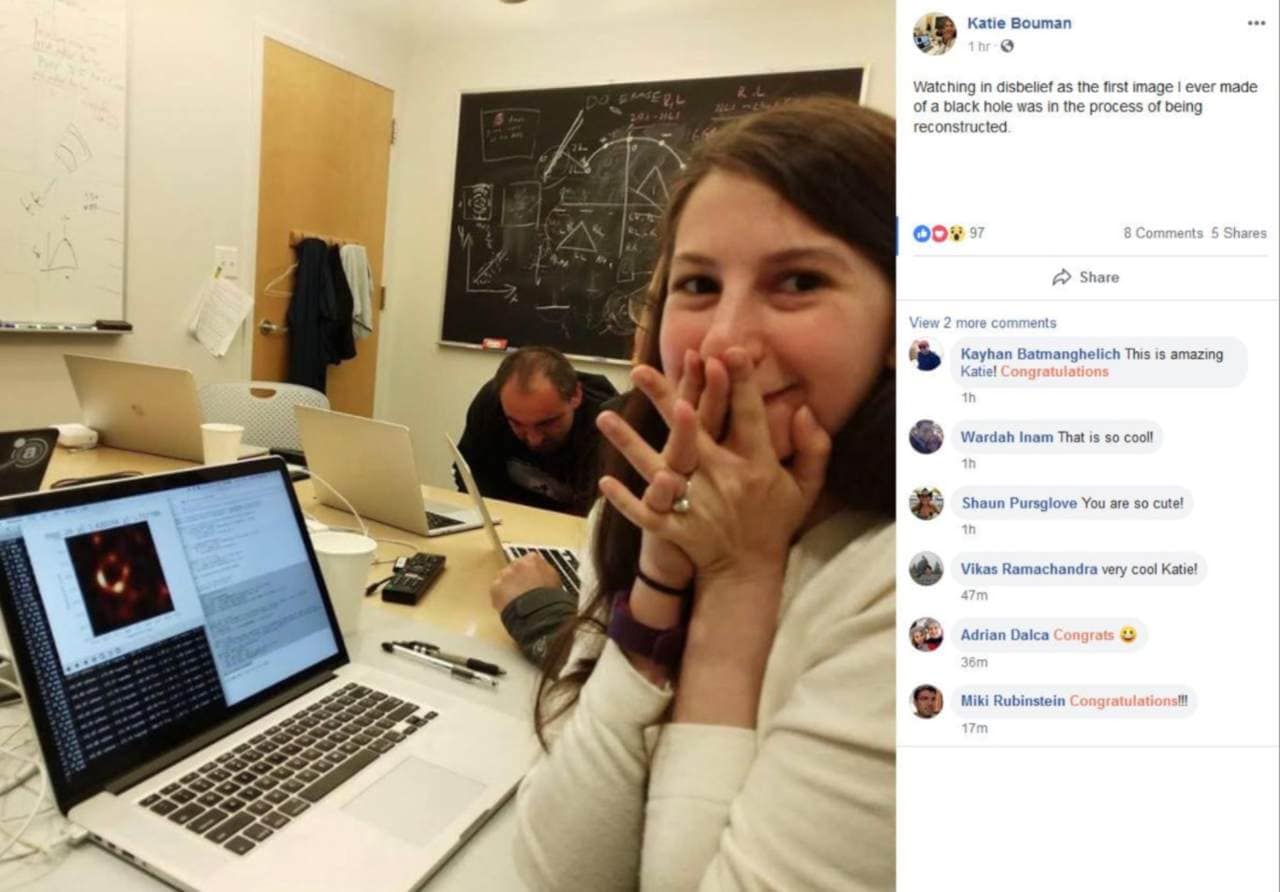 Katie Bouman sharing her delight after the image saw the light of day. Image: Katie Bouman/Facebook

Which was perfectly fine, since the entire effort would never have succeeded without Bouman's contributions. As one data analyst wrote, it was Bouman’s algorithm that “made the effort of collecting all that [telescopic] data worth it.” She spent five years refining her algorithm and then leading one of the teams to test the data. Bouman posing with the 5 petabytes of data needed for the black hole photo. Image: BBC

But in the last few days, the Internet has exploded with rage at this celebration of Bouman in a hyper-masculine field, and we've rapidly witnessed our sexist standards for achievers and who can get credit for what. Many have not been able to swallow that a woman might have led this kind of scientific achievement and have been hunting for a conspiracy theory, or worse. Trolls have repeatedly set up fake Twitter and Instagram accounts in Bouman's name to malign her, uploaded YouTube videos with misinformation about her work, and spread vitriol about her and attacked her credibility. Someone flagged her Wikipedia page for deletion. Reddit is awash with threads like "The Katie Bouman Phenomena OR How Feminism Invents Inventors,” and “History Being Falsely Written IN Plain Sight to Fit A Narrative." And in election-crazed India, one meme falsely and hilariously attributed Bouman thanking Narendra Modi and Mission Shakti for blowing away some pesky satellites that were hindering the black hole project.

Of course, many just wanted to garland a man instead—they finally found one and fervently circulated pictures of one of Bouman's colleagues, Andrew Chael, named as the primary developer for one of the algorithms that created the black hole image. One meme claimed Chael wrote “850,000 of the 900,000 lines of code that were written in the historic black-hole image algorithm!” One Reddit commented wrote, “Katie has been plastered everywhere as being responsible for the code but if this dude did pretty much all the work, seems kind of crappy he doesn’t get recognized.” Some even created fake accounts to propagate him on social media. The disingenuity rose to the point where Chael had to himself tweet defending Bouman's immense work and denouncing those with a “sexist vendetta against Katie”, stating baldly that the team’s software “would never have worked without her contributions”.

3 years ago MIT grad student Katie Bouman led the creation of a new algorithm to produce the first-ever image of a black hole.

Today, that image was released.

Through it all, Bouman herself gracefully posted on Facebook emphasizing the team effort, saying that "No one algorithm or person made this image, it required the amazing talent of a team of scientists from around the globe and years of hard work to develop the instrument, data processing, imaging methods, and analysis techniques that were necessary to pull off this seemingly impossible feat. It has been truly an honor, and I am so lucky to have had the opportunity to work with you all."

(1/7) So apparently some (I hope very few) people online are using the fact that I am the primary developer of the eht-imaging software library (https://t.co/n7djw1r9hY) to launch awful and sexist attacks on my colleague and friend Katie Bouman. Stop.

The sexism continues to be systemic: women in science are cited less than men, get published less in journals, get paid less, and face more sexual harassment. And this strange phenomenon of how people still can't accept a woman being brainy, and especially brainier than the men around her, is not just restricted to the uninformed—it’s exhibited by many scientists themselves. In 2015, Nobel Prize-winning scientist Tim Hunt said "when they [women] are in the lab...you fall in love with them, they fall in love with you, and when you criticise them, they cry." A Google engineer’s infamous 10-page letter on gender in 2017 claimed, among many unscientific ideas, that "women, on average, have more: Neuroticism (higher anxiety, lower stress tolerance)." And just last year, CERN physicist Alessandro Strumia argued in a lecture that women are not discriminated against in science, but rather they don’t like science or just don’t have the aptitude for it.

Maybe singling Bouman out required more nuance from MIT, the media and everyone who rushed to congratulate her. Maybe every time we celebrate a team effort, we must acknowledge the whole team. But the black hole image also just wouldn’t have happened without Bouman, say the experts. So why can’t she be the human face of this effort rather than some titular male head? It's time to accept a different model when we think of who is a ‘regular’ scientist out there working on, and often solving, complex problems of the world.

The author is the co-founder of The Ladies Finger (TLF), India’s leading online women’s magazine.