The Karbonn Titanium Jumbo boasts of a large 4000 mAh battery which Karbonn says should last up to 400 hours on standby and provide 16 hours of talk-time.

Karbonn has extended its Titanium line-up of Android smartphones in India with the launch of Titanium Jumbo. The company has priced Titanium Jumbo at Rs 7,490, though Karbonn did mention that the smartphone will be launched at Rs 6,490 after a discount of Rs 1,000. 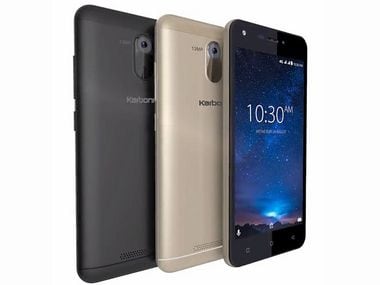 Titanium Jumbo is equipped with a 5-inch HD IPS HD display panel with 1280 x 720 resolution. The device will be powered by a quad-core processor clocked at 1.3 GHz, though the company has not specified the chipset maker or the model of the processor. Jumbo will come with 2 GB of RAM and 16 GB internal storage that can be further expanded up to 64 GB via a microSD card.

The Titanium Jumbo packs a large 4,000 mAh battery which, according to the company should last up to 400 hours on standby. The smartphone also packs a 13 MP primary camera module with LED flash on the back of the device along with an 8 MP front-facing camera module for selfies. Karbonn has added a number of camera modes like panorama shot, continuous shot, and face detection to help users experiment with the camera software while taking images.

On the connectivity front, the Titanium Jumbo supports 4G VoLTE, Bluetooth, WiFi, GPS and USB OTG and dual-SIM connectivity. Last but not the least, the device runs Android Nougat 7.0 out of the box and it will be available in black and champagne colour variants across online and offline retail channels. One thing to note here is that the company has not announced the availability details at the time of writing.