The science instrument responsible for this in-depth revelation was Juno's Microwave Radiometer (MWR). 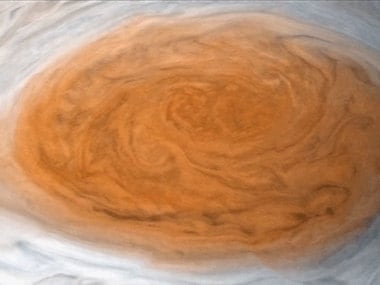 "One of the most basic questions about Jupiter's Great Red Spot is: how deep are the roots," said Scott Bolton, Juno's principal investigator from the Southwest Research Institute in San Antonio.

"Juno data indicate that the solar system's most famous storm is almost one-and-a-half Earths wide, and has roots that penetrate about 200 miles (300 kilometres) into the planet's atmosphere," Bolton said.

The findings, based on data collected by the Juno spacecraft during its first pass over Jupiter's Great Red Spot in July 2017, were announced on Monday at the annual American Geophysical Union meeting in New Orleans.

The science instrument responsible for this in-depth revelation was Juno's Microwave Radiometer (MWR). The Great Red Spot is a giant oval of crimson-coloured clouds in Jupiter's southern hemisphere that race counterclockwise around the oval's perimeter with wind speeds greater than any storm on Earth.

Measuring 16,000 kilometres in width as of 3 April, 2017, the Great Red Spot is 1.3 times as wide as Earth. "Juno found that the Great Red Spot's roots go 50 to 100 times deeper than Earth's oceans and are warmer at the base than they are at the top," Andy Ingersoll, Professor at California Institute of Technology and a Juno co-investigator said.

"Winds are associated with differences in temperature, and the warmth of the spot's base explains the ferocious winds we see at the top of the atmosphere," Ingersoll added. The future of the Great Red Spot is still very much up for debate.

While the storm has been monitored since 1830, it has possibly existed for more than 350 years, according to scientists. In the 19th century, the Great Red Spot was well over two Earths wide. But in modern times, the Great Red Spot appears to be diminishing in size, as measured by Earth-based telescopes and spacecraft, the scientists said.

Launched on 5 August, 2011, Juno has completed eight science passes over Jupiter to date. Juno's ninth science pass will be on 16 December, NASA said.